Guaranteed to break your heart 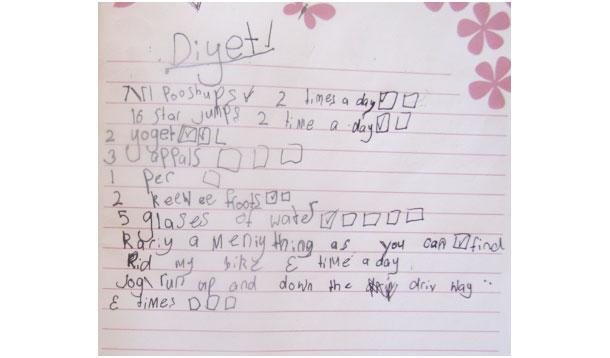 When does the word diet enter the female lexicon? The answer is much too early, according to one mom blogger who stumbled upon her 7-year-old daughter's scribbled note "diyet."

An article at Mommyish recounts the shock and horror of Australian blogger Amy Cheney at the handwritten note found in her daughter's room.

"Where did she learn the word diet? How does she even know what a freaking diet is?"

Followed closely by horror, and being a mom, guilt:

"Whose fault is this? Is it mine because I let her play with Barbies? Because sometimes she’s allowed to watch Total Drama Action? Is it because when I draw with her I can only draw stick figures?"

Be warned, the note will break your heart in several places, not least of which because of the cute misspells but for the catalogue of food consumed versus calorific expenditure in the form of "Poosh-ups."

So it seems that even with moms like Amy, who are “smart about this stuff,” girls will inevitably be bombarded with body issue issues from pretty much the moment they start school. Kids learn a whole many things from their peers—not all of it good but all of it certainly discussion-worthy.

Amy's daughter, nicknamed “Miss Seven,” was educated on the idea of a "diyet” by a classmate. And of course it prompted a great mother-daughter dialogue about "diets and beautiful healthy bodies and the gift that they are.”

Still, parents of daughters, you may find yourself having that little talk years earlier than you expected to. Whether you like it or not.

While you can't change the effed up way in which society works, you can at least plant the right seeds of self love in your kids so they can grow up much less effed up. Please do that.