Mirror, Mirror, Who has the Fiercest Publicist of them all 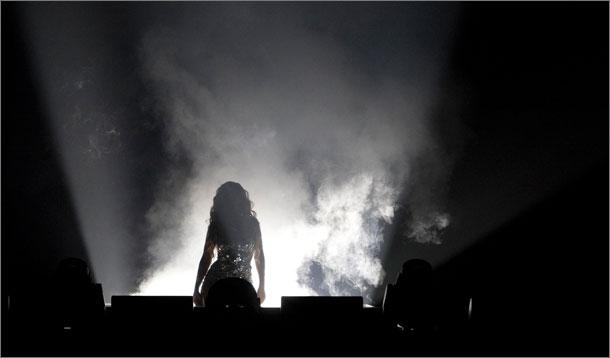 So I told myself it wouldn't happen but here I am, writing another Buzz post about her pop's majesty Beyoncé. While the world (or at least those who cared) were largely divided about whether her Superbowl half-time show was the bomb or simply bombed, there is now no doubt as to who has succeeded Madge for the diva throne. Seems in the aftermath, Be's publicist approached photo wire service Getty to tear down a series of unflattering images of the star during her grand football performance.

Call me crazy right now, but I would say having a few rotten pictures in circulation when the cameras never stop clicking is something of an occupation hazard for celebrities of Beyoncé's status. Not so. While I kinda get Kanye West respectfully requesting that Getty do away with its photos of him a skirt, I also think he shouldna worn one if he didn't want his picture taken.

And though Kanye got his wish granted, Beyoncé's less flattering shots are still out there in cyberspace for all to see. Should a celebrity have control over every single photo taken of them? Even Madonna, who has taken to Instagram posting silly pictures of herself, doesn't take herself this seriously.

An article on Gawker cites another example of Beyoncé's publicist trying to get Buzzfeed to trash pics they posted under the heading, "The 33 Fiercest Moments From Beyoncé's Halftime Show."

While the request was polite, I wonder just how much of a control freak Be must be to try to get a handle on all the gazillion images of her on the web.

Role models aren't perfect. They don't have perfect lives or perfect hair (all the time). They are real people, trying their damnedest to be good. They are perfectly flawed.

As some commenters on Gawker point out, Beyoncé's fiercest pictures are a credit to her, not necessary an insult, since they show her working her ass off during that performance. They represent gritty realism at its finest. That's what garners respect, not airbrushed make believe.

Do you think these photos should stick, or should her B-ness be able to withdraw any image of herself in which she doesn't look Cover Girl flawless?