How Our Hemlines Define Us

From Matron to Whore In A Few Short Inches 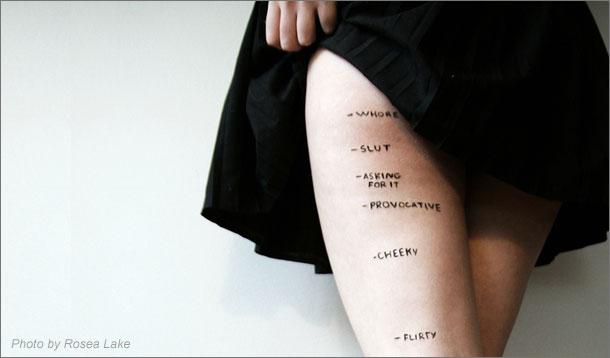 The clothes may not make the man, but they certainly define the woman. At least they do according Rosea Lake, a first-year student at Capilano University in Vancouver, B.C. A photo posted by Lake of the back of a model's leg prompted a lot of discussion on how women are judged by the length of their skirts.

According to an article in the Star, the photo was taken by Lake as part of a high school art project last year. From “matronly” to “whore” scrawled in marker up a woman's bare leg, the provocative shot garnered more than 280,000 'likes' and shares on Tumblr.

“If you see a girl wearing something you see as distasteful, then you automatically discount them as a person and you don’t give them the opportunity to really be somebody in your eyes,” said 18-year-old Lake. “And that’s really shameful.”

In addition to “slut” and “whore,” the words “asking for it” were also included on model Ali Mackenzie’s leg—a social commentary on rape culture, one which plagues Lake, who wonders whether walking around her "rough neighbourhood” in a particular outfit will incite sexually or verbal harassment.

“These are the things I think about, and I don’t think women in particular should have to worry about am I going to be raped because of what I am wearing today?”

Pretty potent stuff from a high school student. Fortunately the medium is the message, and it's spreading... Emails of support have come from locations as far flung as Turkey and Bosnia; professors have asked for permission to use the image in their lectures.

“I’m just happy that it has sparked so much dialogue and conversation," said Lake. "The message is much more important than I am, so I want people to use it.” 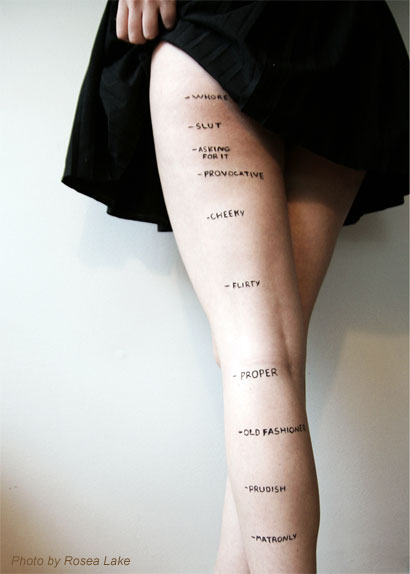