Monkey in the Middle 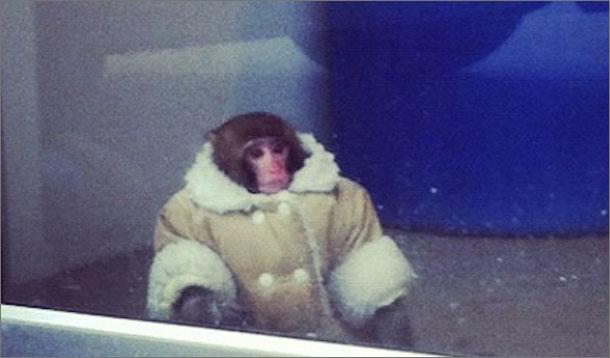 Like any custody battle, whether involving humans or primates, things have a tendency toward ugly. Darwin, the so-called IKEA monkey that not long ago warmed hearts all over while wandering around a parking lot in a shearling coat, is literally the monkey in the middle. Story Book Farm Primate Sanctuary which took care of the Japanese macaque now claims its previous owner abused the animal.

Yasmin Nakhuda, Darwin's 'mom' is fighting for custody of the animal, which was gifted to her by an unnamed breeder. The sanctuary now alleges that Nakhuda and her family members abused the exotic pet so that it would behave.

According to an article in CBC News, the family strangled Darwin as well as hit him "in the head and face, used a wooden spoon to hit him, forced him to live in a small dog crate, failed to change his diaper for up to three days and failed to comply with standards of care for captive primates."

"We believe this pleading is designed to shock the public and discredit Yasmin so as to intimidate her into dropping the lawsuit," Charney said. "The allegations against the children are particularly disturbing."

The sanctuary also suggested the family planned to have Darwin's teeth extracted to prevent him biting the family—something he was doing to protect himself.

Prior to the hearing, animal control officers reported no obvious signs of abuse and subsequently testified that Darwin was extremely happy to see her at animal services, where she proved helpful in washing and diapering the monkey.

For now, Nakhuda refused the offer of supervised visits to the sanctuary in which she would have to sit outside Darwin's enclosure.

For now, it's a case of he said, she said. Who do you believe?