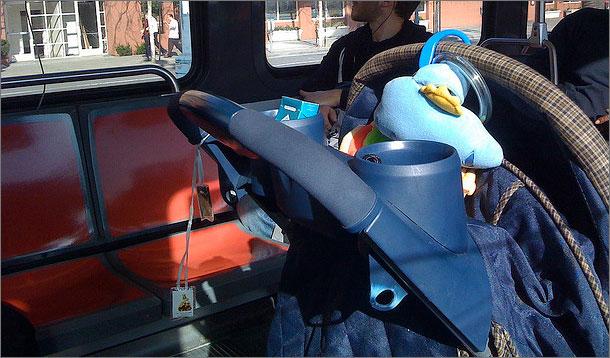 It's hard enough for working moms to get out the door and get their child to day care on time. But for Jodi Christie of Toronto, insult was added to injury after a public bus driver criticized her stroller.

According to an article in the Star, the trouble started when Christie met the bus at 6:40 a.m. She had to ask the driver to lower the ramp so she could board with her stroller.

As she prepared to sit, the male driver allegedly told Christie she “should really get a smaller stroller that you can manage to lift onto the bus so that I don’t have to mess around with this stupid bull---- at 6:30 in the morning.”

He repeated the remark a second time, reportedly adding: “Where’s his dad? He should be helping you. If he even has a father.”

Humiliated and angry, Christie filed an official complaint to the Toronto Transit Commission. She pointed out in the article that her stroller is one of the smallest on the market, not least of which that "my personal situation has nothing to do with me being able to ride the TTC freely.”

Christie, who awaits a response from the TTC, stressed that it's no "cakewalk for parents trying to get around [the city] with their babies in tow."

Agree? Have you ever faced pejorative comments from a public transit worker? Spill it.