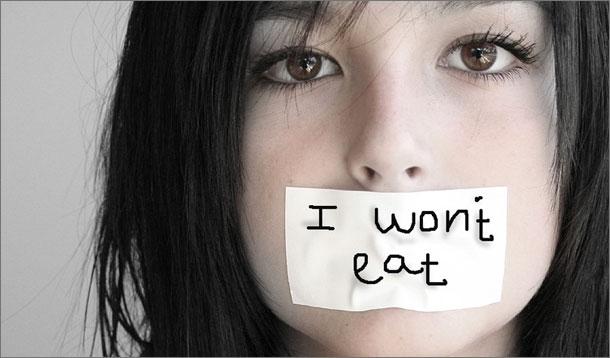 Extreme anorexic Valeria Levitin might just be the thinnest woman alive. At around 54lbs, she has matchstick thighs, and her photo is a disturbing reminder about the perils of eating disorders. However, not everyone sees it that way. Levitin gets fan mail from girls aspiring to be as equally, skeletally skinny.

“I have received emails from young girls who want me to teach them how to be like me," 39-year-old Levitin told the UK Sun. “All the letters I’ve had are from women, mainly in their twenties, who see me as some kind of inspiration. This is why I want to campaign against anorexia. I am not going to teach them how to die. It is not a game, it is not a joke, it is your life.”

Levitin doesn't skimp on her words. Her disorder started when she was a teenager, and she says it has since ruined her life. Originally from Russia, Levitin resides in Monaco, she blames her mother for restricting her diet from a young age. As a teenager she moved to the U.S. and succumbed to the pressure to stay thin.

Now, at just half the weight she should be, Levitin eats very little because her body now rejects many foods. She has missed out on a relationship and family.

“I want to share my story to help sufferers and their families from repeating my fate. I want young people to live happy, healthy and meaningful lives. Anorexia has made me lonely, unattractive and repulsive for the people around me.”

But Levitin is on the mend, slowly. In her fragile state she has to be careful about falling. “This disease is not about being cured by a doctor. It’s a deeper problem than that, it’s a lack of harmony between body and soul... When you become healthier your body will start eating, not vice versa. You don’t force yourself to eat then become better, it’s not like that.”

These days her incentive to get well has everything to do with conception. Even though she would use a surrogate to carry a baby, Levitin is determined to start a family of her own. "I have so much to give."

Read one of her fan letters below, courtesy of the Sun:

I am 23 and weigh 8½st (119lbs) and I do not like myself this way. I want to look skinny like Thumbelina. Nobody can persuade me not to diet, even though I acquired gastritis and pancreatitis.

I have tried all kinds of diets but they all yielded only temporary results. On my present diet I do not feel hungry eating 10½oz to 14oz of food per day, I cannot return to my old way of eating because I fear I will gain weight.

All my relatives are telling me it will hurt me, that I will be a victim of anorexia. I am a little worried that one day I will be faced with a problem of critically low weight and I want to know when to get worried. When did it happen to you?"