Should he Stay or Should he go? 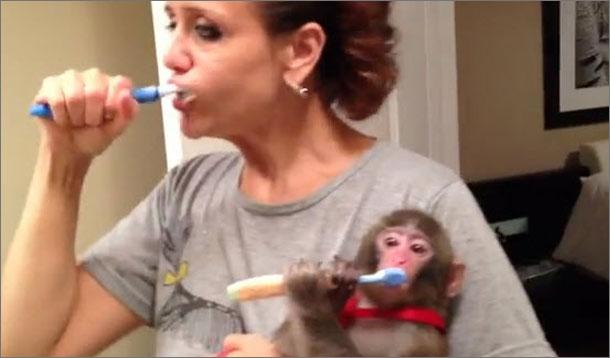 As if the tale of the Ikea primate weren't surreal enough. Turns out, the owner of the monkey that escaped her car in the Toronto store's parking lot hailed from Montreal, and didn't take kindly to having her baby confiscated by Animal Services.

Yasmin Nakhuda claimed her pet Darwin was so attached to her, he had to be near her at all times, even while she slept and showered.

"At the beginning, I was told that was the best for him because generally, monkeys live off the back of the mom," she said in an article on the Huffington Post. She claimed he was prone to panic attacks when she was out of view.

After being taken into custody by Animal Services, Darwin has since been rehoused at Story Book Farm Primate Sanctuary, north of Toronto.

Fined for breaking the city's prohibited-animal bylaw, Nakhuda is seeking legal action in an attempt to regain custody of her pet, which she claims isn't a rhesus monkey but a Japanese macaque. She has also expressed concern at Darwin's wellbeing at his new home.

Stay tuned for the big screen adaptation. It has Steven Spielberg written all over it.

Where should Darwin go? Reunited with his human 'family' or integrated with his own kind? While you contemplate this dilemma, check out this home video of Nakhuda and her 'son'...