Nobody is Going to Put Words in His Mouth 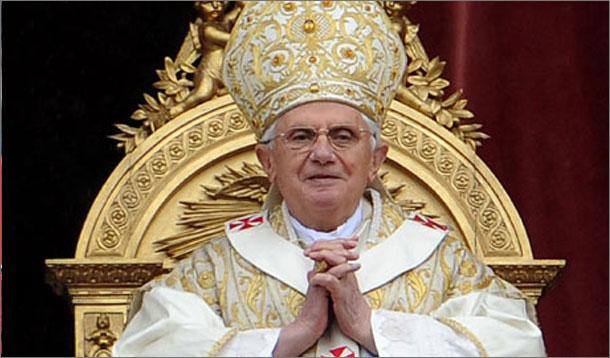 So the Catholic Church is finally entering the 21st Century. The word from Vatican City is that Pope Benedict has got himself a Twitter handle—@pontifex—to spread the good news to the humble man on the street.

For a religion that is often criticized for clinging to the past tradition, it's a step in a modern direction. I wonder how long till Benedict surpasses all the Justin 'Beliebers' once he starts tweeting on December 12.

Obviously the 85-year-old pontiff won't be manning the account, but according to an article in the Sun, he will personally oversee and approve each tweet before it goes out.

“The handle is a good one," said senior media adviser to the Vatican, Greg Burke. "It means ‘pope’ and it also means ’bridge builder.’” Tweets will be multilingual, and said to include Spanish, English, Italian, Portuguese, German, Polish, Arabic and French.

Though he won't be commenting on soccer results or the weather in Rome, Burke insisted that "nobody is going to be putting words into [Benedict's] mouth.” He will of course touch upon natural disasters and other international affairs. Let's hope he never says something so steeped in ignorance, as this priest did.

Got a burning question for the papal head—i.e., why can't women become priests? Here's your hashtag: #askpontifex.

The Church is clearly hoping to reach a younger generation with its message. Launched in 2009, the Vatican's website included a Facebook app through which devotees could access the Pope's speeches and messages on iPhones and iPads.

Social media is not the be all, end all, but it's a start, and Lord knows, the Catholic Church needs it. Will you follow Benedict?