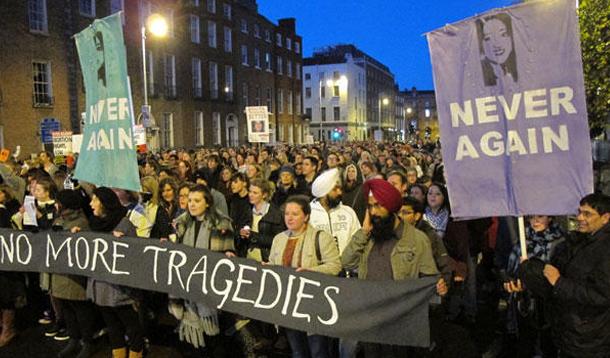 Thousands marched in Dublin this past weekend and held a minute's silence after the death of an Indian dentist who was refused an abortion.

According to an article in the Huffington Post, 31-year-old Savita Halappanavar died of blood poisoning on 28 October, after being denied a termination in Ireland. Though not Catholic, she and her husband had lived in the country since 2008.

At 17 weeks pregnant with her first child, Halappanavar was hospitalized and begged to have an abortion after she became critically ill. Doctors refused to perform the procedure because the fetus still had a heartbeat. They did so four days later, by which time Halappanavar's organs began to fail. She died three days later.

Her death has sparked an international outcry for Ireland's abortion laws to be revisited. Many claim her life could have been saved had doctors reacted sooner.

The constitution is confusing at best in a country where abortion is still illegal, except in cases where it threatens a woman's life. But the 1992 Supreme Court ruling relies on the discretion of the doctors involved in each individual case.

The legislation, many argue, is not only archaic but obtuse. "Twenty years is far too long," chanted protesters. "Ignoring women's rights is wrong!"

Though tantamount to murder in Ireland—and punishable by up to life in prison—abortions are obtained in England by an estimated 4,000 to 5,000 Irish women every year.

According to an article in the Guardian, Halappanavar's parents, who live in India, plan to take legal action against the University Hospital Galway where their only daughter died in agony.

"They are doctors but they were not humane," said her father, Mr Yalagi. "If they had been humane, they would have treated her. I do not want this to happen to other people. I am very angry."

Halappanavar's family has appealed to the Irish PM directly to revamp the existing legislation. Such an avoidable tragedy. Enda Kenny, are you listening?