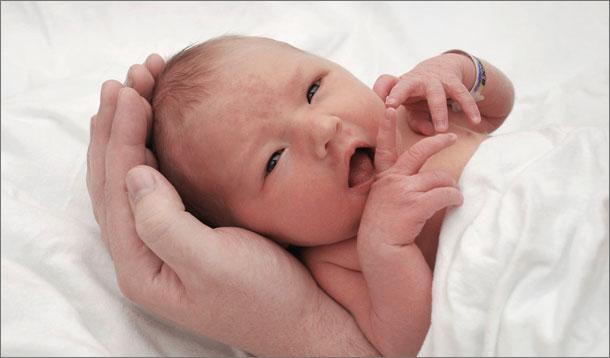 If you thought your labour was tough, spare a thought for Abby Wellington, who delivered her baby by candlelight in her New Jersey apartment during the thralls of Hurricane Sandy.

The 34-year-old pediatrician and her real estate agent hubby, Stephen, weren't exactly expecting to deliver their second child sans OBGYN. But it just goes to show what you can do under duress.

According an article in the Huffington Post, Abby's labor "came on as fast and furious as the hurricane winds that were blowing outside her door" last week.

Without warning, and also without power and running water, the couple went to bed but were awakened by Abby's sudden stomach pains. Even though she wasn't due to deliver until 30 October, and with the hurricane on its way, Abby and her husband prepared as best they could—by borrowing a pair of gloves from a neighbour and some potato chip clamps.

"...we were thinking—this is totally far-fetched, but at least we have [these things]," said Abby.

In a tiny bathroom, her husband, Stephen, spread out towels and lit some votive candles which, he hastens to add, weren't romantic.

That preparation was vital, as Abby went into what was called a precipitous delivery:

"She had, maybe, 15 contractions, 10 minutes of pre-labor, and 30 minutes of labor. When you're with someone like my wife," recalled Stephen, "it's sort of, in them you trust."

Soon enough, baby Henley was born, with "two potato chip clamps on each end of the umbilical cord."

A rare happy ending amidst the gulf of Sandy sadness.

Have a precipitous or extraordinary birth story? Spill it. We'd love to hear...