Did This Single Mom Really Refuse to Tip? 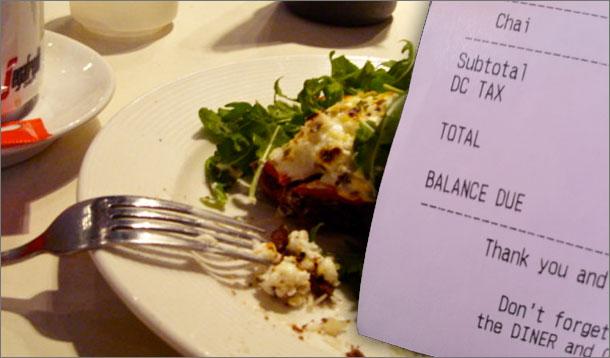 The internet was seeing red at the cheek of the anonymous cheapskate mom. But an article on Mommyish questions the authenticity of the bill.

Having read about the stunt, writer Lindsay Cross, herself once a single mom, claims she "simply couldn’t believe that it was real. 'No one would ever do such a thing,' I thought to myself. 'No one has this sense of entitlement.'”

Cross, like many, refused to believe a genuine single mom would stoop so low as to consume a $140 meal without giving the server a single cent in recognition for the service, which was by her own account "great.”

It does smell a little fishy to me, having grown up under the care of a single mom who never would have dreamed of indulging in a meal that could have covered a week's worth of groceries, let alone foregoing a tip. And if the mom really was that selfish, why would she both scrawling an apology?

Of course not all single moms are selfless and hard working. There are A-holes everywhere. But this bill is an anathema worthy of Mulder and Scully of yore. If she wasn't a bona fide single mom—and the bill was fraudulent—then whoever left the note was a jerk of epic proportions.

As Cross rightly points out, the waitress could well have been a single mom herself. "And we’re normally pretty quick to help out others who are working hard." We don't want to believe the bill is genuine either, as it paints single parents with the same awful, broad brush.

Consider that your server is likely struggling to make ends meet, too. Single mom or not, there's no good excuse for that kind of stinginess.

Think the bill was genuinely from a single mom, or a genuine sham?