The Little Patch That Prevents Hangovers

Second Only to an IV Drip 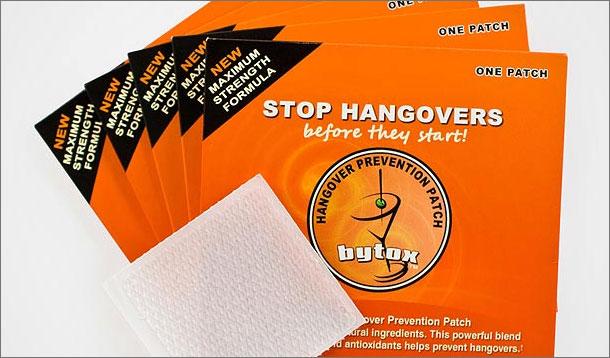 Overdo it a bit at a party this past Halloween? Worried about that dreaded Christmas and New Years fallout? Fear not. Science has the answer: a hangover patch.

According to an article in the UK Sun, similar in look to the nicotine patch, the Bytox Hangover Prevention Patch works by replenishing into the bloodstream "vitamins A, D, E and K, and acids lost through heavy boozing."

It used to be that I could drink and dance all night long, then wake three hours later and work all day. I don't know about you, but once you hit those middle numbers, the body doesn't bounce back as well as it once did. Now a big night for me is anything after 11pm involving more than a single glass of wine! These days the night out rarely warrants the bodily penance, so I rarely partake.

Clearly science wants us to be able to live it large without suffering unduly the next day. So plastic surgeon, Dr Leonard Grossman, invented the patch which he claims comes "second only to an intravenous drip."

Around 45 minutes before you're set to booze, you stick the patch on your arm and—voila—wait for the infusion of acai berry and B vitamins to work their magic, only removing the patch eight or so hours after the session.

Retailing at around $20 for a pack of five, the Hangover Patch already has a slew of happy and loyal customers in the US, and now it's hitting the shelves in the UK. This, in spite of the fact that the patch is still without medical endorsement.

“I tried it twice," wrote one punter. "Both times after nine or 10 Martinis. I can only account for myself. It works great.”

A license to binge drink or a viable detox for the odd lavish night? Would you try it if it were available in Canada?