You Taught me to be Stronger 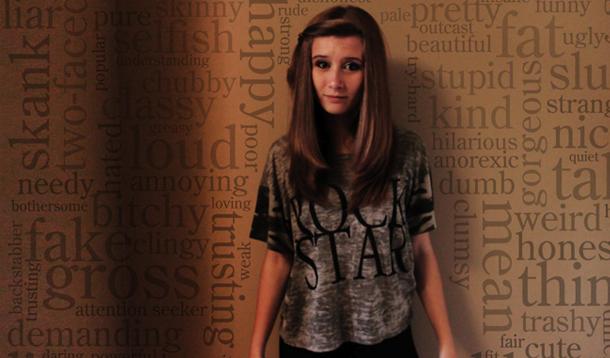 Music has been nothing short of a salvation to Megan Landry, the once-bullied teen whose video Stronger has become a YouTube sensation.

But according to an article in the Ottawa Citizen, not so long ago it was a very different picture for the teen  bullied by a clique of girls who taunted her on Facebook and "ridiculed the way she applied eye makeup."

In the video for Stronger, which Landry shot herself in her backyard, the 16-year-old poignantly addresses those who made her life hell in grades eight and nine: “You taught me to be stronger/to stand a little prouder/yell a little louder/you taught me to look right over your head/to smile instead/forget where I bled/ in the first place...”

Initially Landry kept the bullying from her parents and teachers, and instead poured herself into music, teaching herself to play piano and writing Stronger when she was just 14.

Now in grade 11, she manages to stare down some of the same girls who once tormented her. Testament to Landry's talent, posted in January, the track has had 77,000 hits on YouTube, some 800 comments, and fans from as far afield as Japan.

Adamant that she doesn't want to be "pigeonholed as the bully singer,” Landry has posted 10 original songs on YouTube, and obviously has grand musical ambitions. She pens her own lyrics and plays piano by ear. The next Tori Amos, perhaps?

Whatever the future holds for Landry, one thing's clear: she's certainly an inspiration to girls everywhere right now.