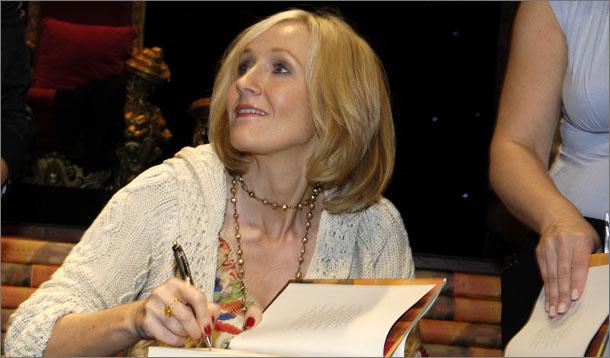 As if to prove she's really a SERIOUS author who is through with wizards and spells, J.K. Rowling penned her first adult work of fiction, The Casual Vacancy, out this week.

In a profile of the mega-bestselling author of the Harry Potter books, the New Yorker revealed just how adult Rowling's new book is. The Casual Vacancy is, um, very adult judging by some of the leaked descriptions (reviews have been emgargoed until the official release):

[describing what a woman sees outside of a housing project] “a used condom glistening in the grass beside her feet, like the gossamer cocoon of some huge grub”

Further mention of a “miraculously unguarded vagina” suggests that Rowling was really out to prove she could write for the R-rated crowd, and had a jolly old time doing so.

Apparently the rules of fantasy writing stipulate that you can't make it too racy. “You don’t have sex near unicorns,” she says, “It’s tacky.”

It remains to be seen whether adults will take to her realism as exuberantly as they did her fantasy. If E.L. James's success is anything to go by, she need not worry. But just don't expect a happy ending.

A Rowling fan? Will you be rushing to pick up her latest offering? Or should she stick to what she knows.