Potty Training... in a Restaurant

Don't Sh*t Where You Eat 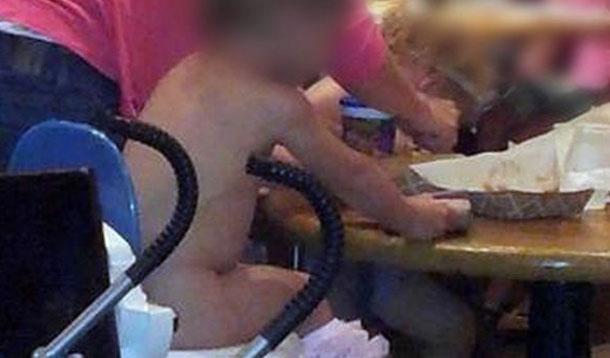 We've all been there, knee-deep in the trenches of toilet training. It's not pretty. And yet we all manage to come through it with scars and plenty of gory tales. Still, it's a battle that most of us have the good sense to keep contained within our own four walls. Right?

But there's always one... According to an article in the Huffington Post, a Utah mom horrified the net as footage of her two tots sitting on a potty chair—in the middle of a restaurant—went viral.

Let's just allow that image to sink in a little, shall we? Bare bums on potty chairs. In the middle of a restaurant. Where people eat food.

Gobsmacked spectator to the horror shock, mom of three Kimberly Decker's photo of the incident has since been taken down, since the tots were nude from the waist down muching their chicken nuggets.

In the article, shocked commenter Ad8835 reminded the anon mom that her children "are not animals - they are small versions of you!" while others doubted the veracity of the footage, suspecting it had the markings of Punked or a similar candid camera TV show written all over it.

Bad enough to see boys (and grown men) 'watering' trees in public. But if it's legit, this story brings new meaning to the adage, "don't sh*t where you eat."

Any disasterous incidents while training in public? Spill, you know you want to...