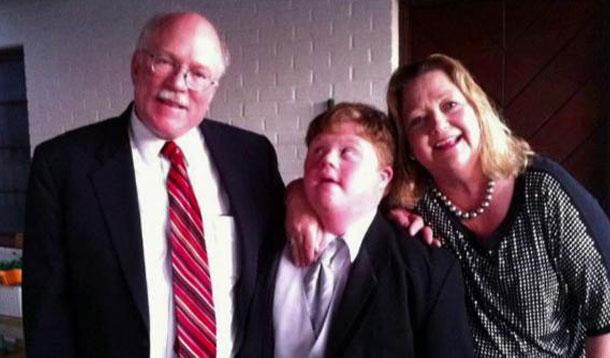 An outraged family plans to sue an airline after their teenage son with Down Syndrome was denied entry onto a first-class flight, according to an article in the Huffington Post.

Although Joan and Robert Vanderhorst have flown countless times with their son, 16-year-old son Bede, they decided to splurge an extra $625 to treat Bede to a first-class experience.

Yet the family's excitement was quickly replaced with shock when an American Airlines representative pulled them aside, saying Bede couldn't board because he posed a "flight risk" to the pilot since their seats were near the cockpit.

Though the family claims he was calm in the waiting area, the airline claimed the teen was 'agitated' and running around the gate area, and therefore deemed "not ready to fly."

Surprisingly, the Vanderhorsts claim this is the first time they have faced discrimination on a flight.

"My son is no different from a 4 or 5 year old as far as behavior," said Mr Vanderhorst, who denies in the article that his son was running, shouting or causing any other distractions. "It was horrible, humiliating. We were treated like criminals."

Not only was the family escorted to the rear coach section, they were apparently not issued with a refund for the cost of the upgrade. Other families with young children have also been kicked off of planes: the two year old who threw a tantrum, and the family with four children, and the 18-month-old Muslim baby apparently registered on the no-fly list.

Are airlines well within their rights to call the shots and refuse passengers entry if they suspect security might be compromised? Or has post-9/11 paranoia neutered all common sense?