Women and Girls MUST be Role Models for Men and Boys 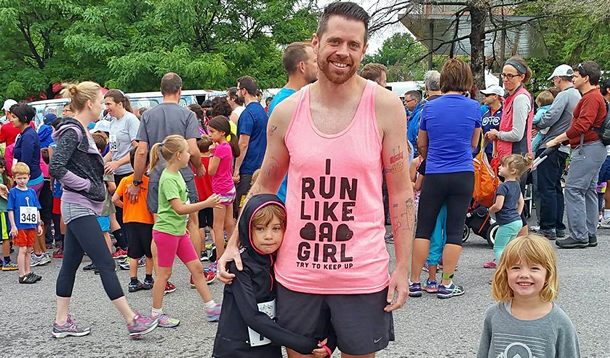 There is a large group of people out there — and I feel comfortable suggesting that much of this large group of people is comprised of men, who think boys can only turn into men when they repress their feelings. This group also believes strength is defined almost entirely by the size of the muscles you have. Much of this group thinks men should mow lawns and women should cook meals. And one other irksome thing about this group is that they direct the boys in their lives to watch men hockey players, superheroes, and professionals when they want to show them someone to role model after...

I've seen it done hundreds, or maybe even thousands, of times. I see it when I'm in a store looking at t-shirts with Rey on it and a dad tells his son "that shirt is for girls." I see it in lineups at McDonald's when that dad also tells his son "he doesn't need the pink toy because it's for girls." And I see it when a mom tells her son that "the red nail polish is great, but boys don't wear nail polish no matter what colour it is."

I notice this line of thinking more at certain times in my life. With the success of our Canadian women in the recent Olympics, this was one of those times I noticed it frequently.

For Canadians, the Olympics were largely about the power of women. Our women performed other-worldly in the summer games — where we have to constantly remind ourselves it’s hard to train for summer sports in a country where summer lasts 13 days.

We saw great performance by younger women and older women and we rightly hailed these athletes, who have committed themselves to their sports, as great role models for our daughters. We saw interviews with young girls asking how they've been inspired and we saw young girls sharing their well wishes with the athletes.

We see the same thing starting to happen in movies as well, although we still have a loooong way to go for completely diverse representation. And we see it in comic books where nine year-old girls are being named the most intelligent superheroes in a universe full of superheroes.

Then you look to entrepreneurs, and scientists, and astronauts, and novelists and it’s obvious our daughters are flush with amazing women to hold up to our girls and say “look at them, look how smart and courageous and strong and caring they are.”

There’s no point really of me spending too many more words trying to explain this any further, because really, it is quite simple:

Women and girls can be role models for men and boys.

We don’t need gendered role models, we need role models who carry characteristics we would like our kids to see. I think there’s something to be said for kids hearing that. And, it’s a simple fix.

Tell boys they can look up to women too. Because boys want to hear this from their parents and from any men in their lives. It's natural for a boy to think a woman is amazing and it's horrifying when an influential adult in their lives takes that away from them. Boys need to be reassured that what they like is valid even if it isn't what their five best friends like.

If you want to role model for the boys in your life, make sure you show them all the things that they can look up to.

Sit them in front of a screen and show them a Simone Biles floor routine and then let them try it out in the backyard. Let their favourite Harry Potter character be Hermione Granger and help them make a wand to perfect her spells. Show boys the contributions women have made over the years in fields like science and math and the arts. Let them read books with girls as the protagonist.

Show them as many as you can. Show them so many that they say “I get it, women are great, but I already know that.” Show them until it’s normal in their lives. If they’re young enough, that will already be the case. And when they tell you they want to be just like Penny Oleksiak, don’t correct them and tell them they must mean Michael Phelps.

RELATED: Why Men Should Be More Cool With Crying