Could Your Smartphone Photo Soon Check For Skin Cancer? 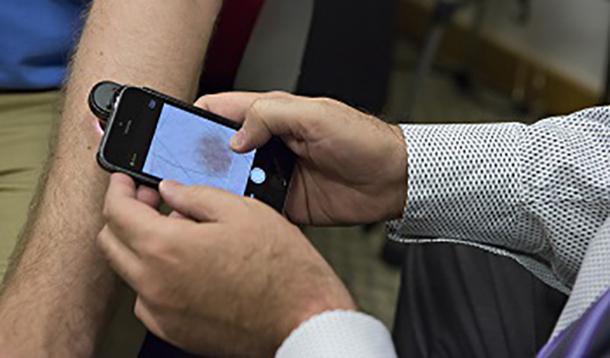 It's no secret that Melanoma skin cancer is on the rise in Canada. Imagine that you pop out of the shower one day and notice that a mole looks a little different than it did before—maybe it's a little discoloured or misshapen. Maybe it's a new one. Regardless, you think it needs to be checked. Your next step would be to call your doctor, make an appointment, maybe seek a referral to a dermatologist, and go from there.

What if you could run a quick test yourself?

George Zouridakis, professor of engineering technology at the University of Houston, developed an app called DermoScreen. Used with a $500 magnifying lens (so it's not quite ready for consumer consumption) that attaches to your smartphone's camera, the app had an 85% success rate in early testing.

Obviously, the goal here is not to replace medical care, and those who had a positive result would be referred to specialists. If this product becomes widely available, however, it could mean early detection for so many of those who do not have easy access to medical care (such as rural areas or developing nations).

Science is awesome. Maybe one day your smartphone photo will save your life.

Be safe! Check out the Top 3 Natural Sunscreens for 2014.

Photo by the University of Houston.