LEARNING THE LINGO IS HALF THE BATTLE 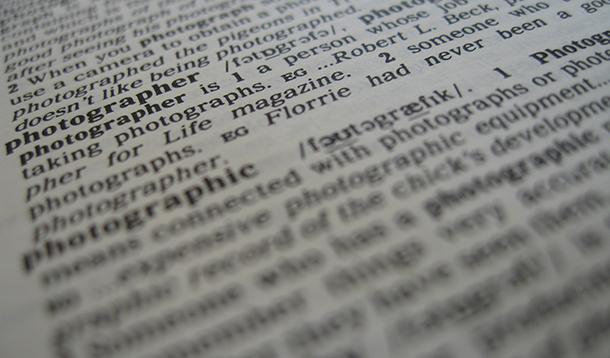 I often think that photography is intimidating to many people because the lingo sounds so complicated. I’ve started this glossary off with terms that I will be using in my posts, and will add more as needed along the way. I’ll link back to this post when I use terms that are defined here. If there’s a term you need explained, leave a comment and I’ll add it.

Aperture:  The adjustable diameter of the opening in a camera lens, also referred to as an f-stop. The measurement is usually expressed as f1.4, f2.8, f22, etc. The lower the number, the larger the opening. So, f1.4 has a larger opening (and therefore lets more light in) than f.22.  However, the depth of field is much smaller at f1.4 than it is at f.22.

Bokeh: The appearance of an out of focus background in a photograph, usually illustrated when using a wide aperture. Depending on the nature of the lens used, the “shape” of the background distortion may be different. You can also create a custom bokeh.

Bracketing: Taking a series of photographs of the same subject at slightly different exposures. Usually done in increments of 1/3.

Depth of Field:  The area in front of, and behind, the point your photograph is focused on on that is also in sharp focus.

Exposure: The amount of light hitting the sensor or film. People often refer to this in seconds, such as a 30-second exposure.

Exposure Triangle: The interdependence of Aperture, Shutter Speed and ISO.

Flash: A component of the camera (or an external unit) that provides a brief flash of light.

Glass: A colloquial word for Lens.

Iris Diaphragm: the part of the camera that allows the light in. The size of the Iris Diaphragm opening can be controlled by the Aperture setting.

ISO:   This one is a holdover from the days when we all shot film. Adopted by the International Standards Organization, it was a numeric index that indicated how light-sensitive the film was. The lower the ISO (i.e. 100, 200), the less light sensitive your film was. Great because it produced less grain in the images, it was primarily used in bright light settings. Higher ISO was used in lower light settings. The term ISO is still used on digital cameras today, except there’s no film inside. The same rules apply, however.  The higher the ISO, the more light the camera can capture without having to open the aperture more or slow down the shutter speed.

Lens: The part of the camera through which light travels to the sensor or film. On dSLRs (and SLRs), this is a separate device from the camera body and is removable.

Point and Shoot Camera:  A camera where the photographer looks through a viewfinder to see what they are taking a picture of. Unlike an SLR or dSLR, the image in the viewfinder is seen through a different lens than one that allows the light in to expose the sensor or film.

Shutter:  A component of your camera that opens and closes to let light in to reach the sensor (in the case of a digital camera) or film.

Shutter Speed:  How long your camera’s shutter is open for.

SLR:  A single lens reflex camera. These cameras use a mirror and prism that allow the photographer to look through the lens to see what they are taking a picture of.

Tripod: A three-legged stand used to keep a camera stable. In most cases, each leg is adjustable.

White Balance:  A setting on your camera that allows it to adjust for the different colours of light that are emitted by different light sources.