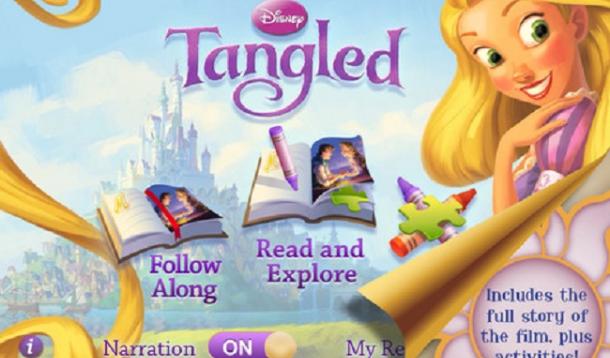 Disney's Tangled, the 2010 animated film based on the Rapunzel fairy tale, is now an interactive book for the iPad.

Simply called Tangled: Storybook Deluxe ($6.99), it's similar to other Disney Storybook apps for the tablet, such as Toy Story, Beauty and the Beast, Cars 2, Peter Pan and The Lion King: Timon's Tale.

In case you haven't seen the feature film, Tangled tells of a long-haired Rapunzel who has spent her life trapped in a tower. That is, until a thief named Flynn rescues her, and the mismatched pair set off on an adventure across the kingdom.

The app lets you read the story in four different ways:

One is to flip through the book like a paper book, complete with beautifully hand-drawn illustrations, as well as artwork and animated sequences from the film. With this option, kids can read the book at their own pace or you can read the book to them.

The second way to experience Tangled is to have the book read to you, by a pleasant female narrator, and the words are highlighted when spoken. This is ideal for kids who'd like to hear the tale, perhaps while in the back of a car, and can follow along with their finger. Character voices and music from the film can also be heard.

Fun for kids, the third option is to record your own narration by tapping a small microphone, reading the text on the page, and then playing it back while reading the book or letting friends and family hear your delivery.

The fourth and final way to read Tangled is called Read and Explore, as it folds in relevant activities and games on various pages of the book (such as coloring pages and puzzles). Plus, the illustrations also reveal other surprises for those who want to tap the images, including sound effects and animation.

It is possible to play the mini-games without reading the book. Simply tap the play tab from the main menu and you'll have access to six colouring pages (with the option to save to your photo library or share via e-mail), six jigsaw puzzles based on different points in the story and a Floating Lanterns game with three difficulty levels, where you'll drag a finger to connect floating lanterns of different colors.

Tangled: Storybook Deluxe is a well-made digital book with a smooth interface, many ways to read (or hear) the tale, gorgeous artwork and mini-games. Fans of the film will especially appreciate this App Store download.