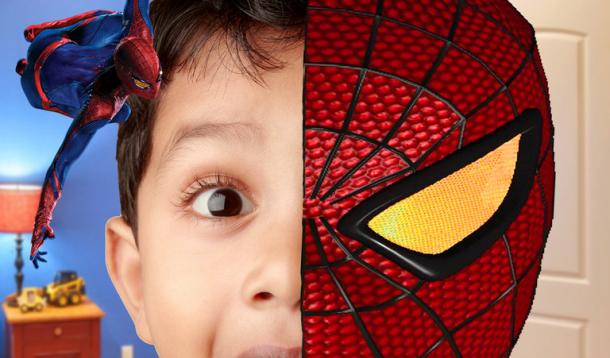 Disney is celebrating a major milestone at Apple’s App Store: they currently hold the no. 1, no. 2 and no. 3 spots, for “Temple Run: Brave,” “Where’s My Perry?” and “Where’s My Water?,” respectively.

And while it’s not a game, per se, Disney has a new offering that’s climbing the charts, too.

Based on the blockbuster feature film, Spider-Man AR Book ($2.99) is a digital book and collection of interactive activities for iPad, iPhone and iPod touch.

t its core, the book follows the same story as The Amazing Spider-Man movie, including still photos from the film to accompany the text. The book is narrated by default, and kids can either swipe to turn “pages” or, for younger children, parents can select for pages to turn automatically. Kids can also read the book themselves or parents can read to them. There’s also an option to take out the sound effects and background music.

Kids can flip back and forth between pages at any time or tap one of 37 small thumbnail images at the bottom of the screen to jump to a particular part of the book.

Unlike other digital books for iPad, there is no option for kids to record and playback their own book narration, however. This would’ve been a nice addition.

At the risk of spoiling the story, the book—like the movie—is a retelling of how Spider-Man acquired his superhero powers while still a high-school student. The story also sheds a light on Peter Parker’s father, who disappeared mysteriously, and his research work with fellow scientist Dr. Curt Connors at Oscorp.

At certain parts of the story, you can play one of six “augmented reality” (AR) experiences tied to the tale. For example, when the narrator tells of how Parker was influenced by a wrestling poster to create the Spider-Man mask, simply tap an icon to see a red Spider-Man mask superimposed over your own face—and you can move around and the mask stays on. AR refers to a live view of a real, physical environment—seen through the camera lens of your iOS device—but what the user sees is augmented by virtual, on-screen information, images or sounds.

If you don’t want to stop the story, all half-dozen AR activities are accessible from a separate section within the app. You can try oun Peter Parker’s eyeglasses, tap spiders crawling on your face before they can weave a web, take a photo as an Oscorp employee and type your name on the badge (before saving the photo, printing or emailing it), and more.

Some experiences are better than others, of course, such as the fun Crawling Spiders AR game over the disappointing Spidey-Sense AR activity. This Spider-Man AR Book was designed and produced by Total Immersion, best-known for last year’s free SkinVaders app with AR games.

For $3, there’s a lot to like about the Spider-Man AR Book—especially for Spider-Man fans or those who enjoyed the movie.
Coming soon: Support for a number of languages via a free downloadable update, says Disney, including audio and text in Spanish (Latin American and Castilian), French, Italian, German, Dutch, Brazilian Portuguese, Chinese Mandarin, Korean and Russian.