Easy weekend dinner for the crockpot 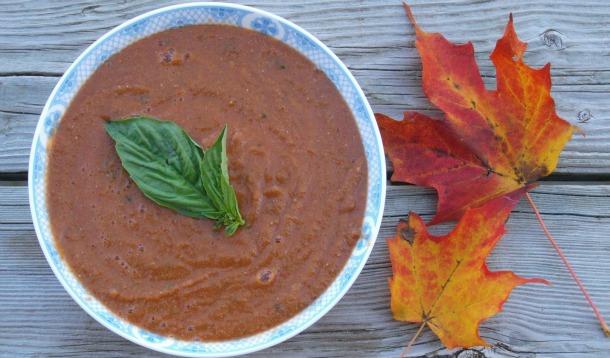 This summer, my sister moved home and brought with her a fancy university degree with very few job prospects in her area of expertise, a goal to get a job anyway so she can buy some rental properties, and a fairly new vegan (almost raw) diet along with a whole bunch of stuff from her University apartment that is now hanging out in my basement. Being vegan means my sister mostly cooks for herself, since usually I can barely get the kids fed before we’re running out the door for after-school activities. Sometimes she cooks for me too, which is a totally awesome part of having her home again. But occasionally, as a non-vegan, I like to stretch my own ideas of what needs to be in a meal and make a vegan dish the whole family will hopefully enjoy, but at least try – which is exactly what happened with this Vegan Slow Cooker Hearty Tomato Soup. Like most Canned Soup Mom recipes, this slow cooker soup involves dumping, setting, and forgetting – so it wins bonus points in my books for being super easy. It's also super delicious and a very hearty soup my sister says would even make an excellent Bolognese-sauce for pasta. Put all the ingredients into the slow cooker and stir until combined.

Cook on low for 6-8 hours (or ideally, on low for 6 hours, then if you have  slow cooker that automatically turns to warm when the cooking time is done, just let it sit on warm until you get home).

Serve warm with more fresh basil and this crusty homemade bread which also happens to be vegan.