Five Ingredients, Less Than Ten Minutes Of Work And Only One Hand To Eat 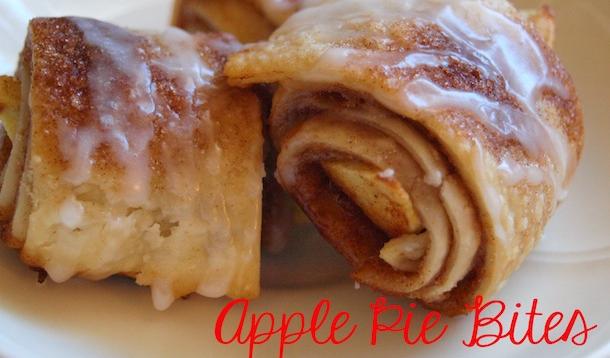 My kids and my husband love apple pie but usually the last thing I want to do is spend what feels like hours in the kitchen peeling and slicing apples. That's why I love this recipe. It has all the taste of an apple pie with less than an 1/8th of the work! Roll out each pastry until flat and even (so easy my 3-year-old can do it without dropping her "binky"). Top with cinnamon and sugar. Cut pastry into eight strips, place slice of apple at end of each. Brush with butter, top with more cinnamon sugar and bake. Let cool on rack and try not to eat them all! In small bowl, mix cinnamon and sugar together reserving 1 Tbsp. for the topping.

On lightly floured surface roll out each pie crust until flat and even.

Brush each crust with melted butter and top with cinnamon sugar.

Cut each pie crust into eight strips, top each one with an apple slice and roll (sugar side in).

If using glaze, put sheet of wax paper or paper towel under the baking rack (for easy clean-up), mix glaze and using fork drizzle glaze on top while apple pie bites are cooling.

PPS: Want to try your hand at making your own pie crusts? Try Karen's recipe for the perfect pastry.

Adapted from Cookin Up North.