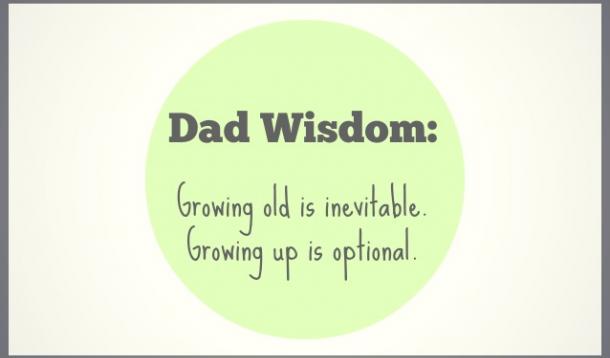 There's a reason 'dada' rhymes with 'haha.' It's because fathers are funny. At least, they think they are. My dad believes he's hysterical. I don't have the heart to tell him his jokes are painful. Thankfully he usually butchers the punchline by mixing it up with the ending of a completely different joke or by losing the plot altogether. And THAT my friends, is hilarious.

Speaking of hilarious, here are some "dad" themed jokes for you to share this FATHER'S Day.

Warning: The term hilarious has been used loosely. Consider these groaners a little dad payback for subjecting you to his awful jokes over the years. And don't forget about those hideous black socks and sandals. Revenge is sweet...

1. What did the daddy buffalo say to his boy when he dropped him off at school? Bison.

2. How do you make your dad's handkerchief dance? Put your boogie in it.

3. Did you hear about the dad who slept like a log last night? He woke up in the fireplace.

4. My dad walked into a bar with a chunk of asphalt under his arm and said, "I'll have a drink and take one for the road."

6. My dad bought a fake Christmas tree, and the guy behind the counter said, "Are you going to put it up yourself?" My dad said, "Don't be disgusting. I'm going to put it in the living room."

7. My dad is so generous that he gave away all of his old batteries, free of charge.

8. What do you call your dad when he falls through the ice? A popsicle.

9. Why did the dad dump ground beef on his head? He wanted a meatier shower.

10. What did the psychiatrist say when the dad walked into the office wearing a suit made of plastic wrap? I can clearly see you're nuts.