Tips For Mummies...yummy and embalmed 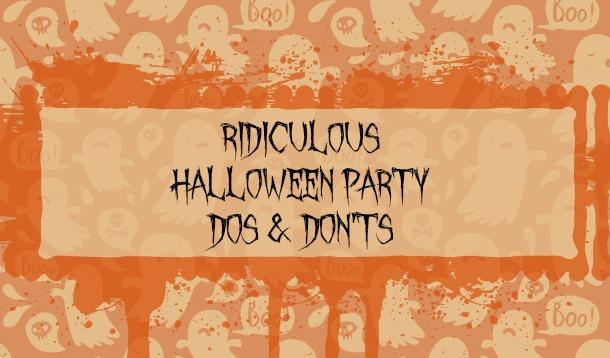 If you're attending a Halloween party this year, get down and get spooky, but be aware of these dos and don'ts — from a ghoul who knows her way around a jack-o-lantern.

Do dress up. Guests who come to a costume party in street clothes should be forced to wear a pumpkin on their head for the night. Have you ever smelled the inside of a day old pumpkin? Wear a costume. Even if it's just a lampshade on your head.

Gentlemen, do not ask every female guest if they'd like to see your halloweenie. Unless it's really impressive — then by all means show us. We'll take a look.

If your name is Frank, do tell everyone your last name is Stein. But don't legally have it changed on your driver's license.

Do yell "Walkers!" every few minutes and pretend to be terrified, but ready to lop off a zombie's head.

Do jump out from behind the shower curtain to scare guests who enter the bathroom. But don't be naked because that would be awkward; even if you're the guy with the enormous halloweenie.

Display mice and bats and creepy crawlies on the food table. Do not use live ones. Or even dead ones. Fake, only fake. Nothing spoils a party faster than a rat in the pâté. Nobody likes râté. That's gross and a lawsuit in the making.

Do tell guests that you "vant to suck dare blooooood" but don't actually do it.

Definitely bring a house warming gift, but nothing possessed or undead or evil in any way. Wine or a potted plant will do.

Do compliment a guest on their werewolf costume. But before you do, be sure it IS a costume and not a menopausal woman who hasn't tweezed in awhile. The same goes for the guy in the fat suit. Make certain it actually is a costume before you say, "Man, it must be hot in there!" (while poking him in the belly)

So that's about it. Keep the nudity to a minimum, try not to poison or exsanguiate anyone, avoid human sacrifices or zombfication and your party will be a hit.