A delicious, easy and show stopping dessert for Mother’s Day, that is not vanilla at all! 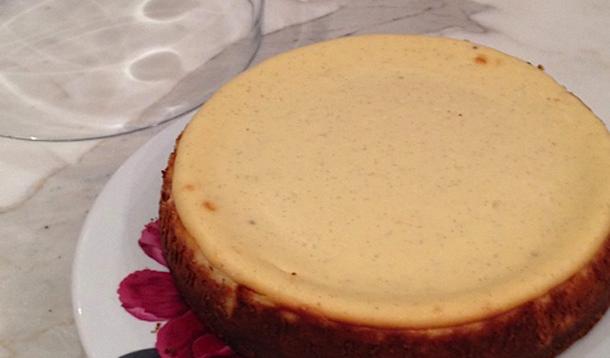 Last year my job was to make cheesecakes. Find the recipe or create it, make it, taste it and then discuss it to see how it could be improved. To say it was a great job would be an understatement. Even though I have a new job I love, knowing how to make the perfect cheesecake has come in handy a lot. In honour of mother’s day I thought I would share the proper steps on how to make a beautiful and delicious cheesecake. These steps can be applied to any flavour of cheesecake. For mother’s day I decided on vanilla bean because I’m a sucker for those little black specks.

Cheesecake needs to be made with room temperature cream cheese. I take the cream cheese out of the fridge and leave it on the counter until I am ready to use it (at least a half an hour). If you are in a crunch for time you can microwave each unwrapped package of cream cheese for 15 seconds.

I like the rest of the ingredients to be at room temperature as well. The eggs, sour cream if you are using etc. This will prevent little balls of cream cheese forming which you are trying to avoid.

While some recipes will tell you to bake the crust before pouring the batter on top you do not actually have to do this. The crust will bake perfectly fine at the same time as the cheesecake batter.

The oven needs to be preheated at 350 for at least half an hour before baking your cheesecake.

Always use a spring form pan and line them with parchment paper. Two rectangles around the sides and one circle lining the bottom. You can get the right size parchment paper by tracing the removable bottom and sides of the pan. 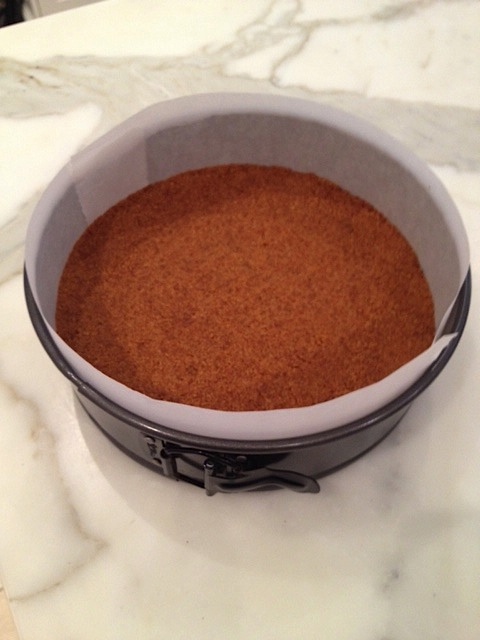 Allow cheesecake to cool in spring form pan on the counter, approximately 5 hours. Then place in fridge overnight, uncovered. The next morning cheesecake can be removed from springform pan.

In a stand mixer, whip cream cheese until very smooth, and it looks like icing. Add sugar, mix well for ten seconds.

Using the tip of a small sharp knife, scrape beans out of vanilla pod. Add to cream cheese mixture and mix on high until you see the little black specks evenly distributed, around 20 seconds.

Add eggs, one at a time on low speed, adding the next egg once the last egg has been fully mixed in. Add vanilla with last egg.

Scrape down sides of bowl with a spatula and give batter one last stir.

Lift pan up and bang down on counter to release any air bubbles.

Bake in oven for approximately fifty-five minutes.  Cheesecake is done when outer ring is mostly solidified and inner part is still jiggly.  Don’t worry, cheesecake will solidify as it cools.

Rim a knife along outside of cheesecake. Allow cheesecake to cool on baking rack on counter. Once completely cooled, place cheesecake in refrigerator over night.

Top with toppings you like, but I think simple is best here.

Lara Katz: Dreaming Up Delicious The Best Apple Orchards to Visit in Ontario

Lara Katz: Dreaming Up Delicious 5 Easy And Delicious Recipes You Can Make With Beets