The Culture Of Pink

Why I'm OK With The Pink-ification Of Our Toys 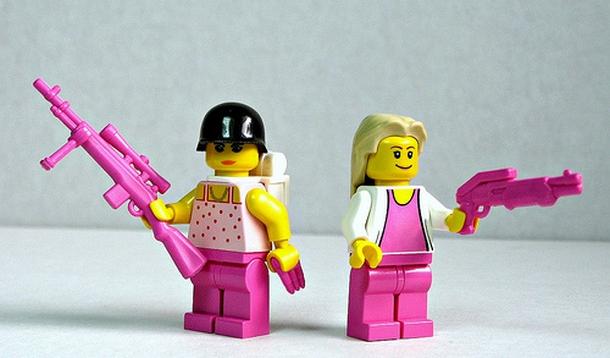 I’m going to venture out of my typical celebrity bubble here for a minute and talk about something that has bothered me lately. Recently, Lego announced that it was going to introduce a ‘pink’ line of Lego blocks marketed towards girls, and the whole world went up in arms over it. How dare they think that girls would only play with Lego because it was pink! How dare they try to put our girls in this little pink bubble and assume that they only want to play with things that are pink and frilly and princess-y?! But here’s the thing, I’m totally ok with the pink Lego, and the frilly and the princess-y things and anything else that they want to ‘pink-ify.’ But it doesn’t seem that it’s so politically correct to say that anymore, does it?

I live in a very testosterone-driven house. After all, I have 3 sons and one daughter, so trust me, when I can buy something pink I do it in a heartbeat. My daughter is the oldest and has absolutely no interest in Lego—the pink or classic-colour variety—but if she was younger you can bet your ass I would be out picking up some pink Lego for her to play with. And I can also guarantee you that her brothers would play with it more than she would.

Having 3 sons and 1 daughter means that I have many (too many) toys in my house—both of the pink princess-y kind and of the dark superhero-y kind. They all co-exist together in toy bins in my basement and I can honestly tell you with no prompting from me my boys tend to play with the superheros and my girl tends to play with (or at least played with) princess-y toys. Now she’s all about Justin Bieber and make-up and clothes—kinda making me long for the days when she dressed up in her favourite Disney princess costume. I don’t think I have ever seen her pick up a car or a Transformer or a Superhero to play with. Some would call her a girly-girl; I just call her a girl.

So even though I buy the girly toys for my girl and boy toys for my boys there are both toys in my house—free for whoever would like to play with them. Does it make me a bad parent for assuming that my daughter would like something pink vs. something blue? No. Do Barbies and Princesses give our daughters poor role models to play with? Please. Barbies and Princesses are pure fun and do nothing but spark the imagination of the children who play with them. It’s only when adults enter the picture and places their conceptions of what those dolls represent that do we start questioning them.

In my house I will admit that my kids play very gender stereotypical roles. My daughter is a figure skater and my two older boys are hockey players with my youngest one currently in skating lessons and we anticipate putting him in hockey in the fall.  Not because I have assigned them to these stereo-typical gender roles but because that is what they asked to do. Sometimes girls just like pink things and boys just like blue things even without all these pesky adults pushing it on them. I don’t tell my kids what toys to play with and I certainly don’t dissuade them if my youngest son wants to play with one of his sisters old Barbies (or more shockingly, one of her Bratz dolls—yes I have them too!) or if my daughter wants to play mini-sticks with her brother. But I have to tell you—that rarely happens.

So bring on the pink products! After all, I have a lot of blue in this house that I need to balance out.

Kelli Daisy: Scene and Heard Voices Behind The Movie

Kelli Daisy: Scene and Heard The Top 10 Celebrity Splits Of 2011