SO GOOD THAT EVEN GRANDMOTHERS WON'T SHARE WITH THEIR GRANDKIDS 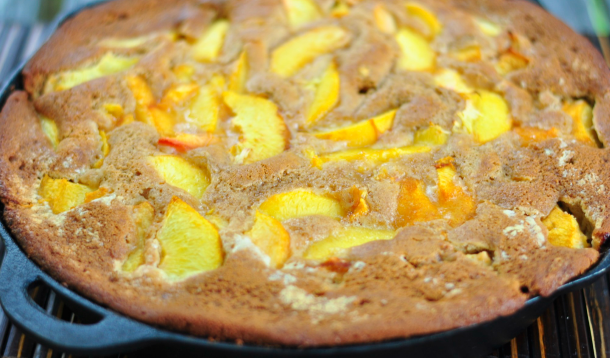 If it ain't broke don't fix it, and that's why this peaches and cream skillet cobbler uses almost exactly the same batter as the one in my zucchini chocolate coconut loaf. So bascially, I'm plagiarizing myself.

I recently made this cobbler to bring up for a cottage week with my family and caught grown adults — people who should know better, like grandmothers and aunts!! — hiding out in the kitchen finishing the last few pieces, far away from the prying eyes of grandchildren and children and the person who ACTUALLY MADE THE DESSERT! I'm not bitter although my kids might need counselling.

Anyway. Make it and good luck saving yourself a piece.

Combine the flour, salt, baking soda, and baking powder in a large mixing bowl, and set aside.

Melt 1/2 the butter over low heat (1/4 cup in a small saucepan), but don’t boil, or use a microwave to melt the butter.

While the butter is melting, beat the eggs in a large mixing bowl.

Once the eggs are fluffy, scoop in the crème fraîche and mix well using a fork or whisk. Add vanilla and continue stirring.

Slowly pour the dry ingredients into the wet mixture and combine well. Use a fork and stir until completely blended.

Add the cream and rum and blend well.

Melt 1/4 cup butter in a 12" cast-iron skillet over low-medium heat. Once the butter is melted pour in the batter and scatter the peach pieces over the batter, pressing them slightly into the batter.

Slide the skillet in the oven and bake for 60 minutes, or until the skewer or knife comes out clean. Allow to sit until slightly cooled before serving.

Serves 8-10 and it's even better on day two. If it makes it that long. 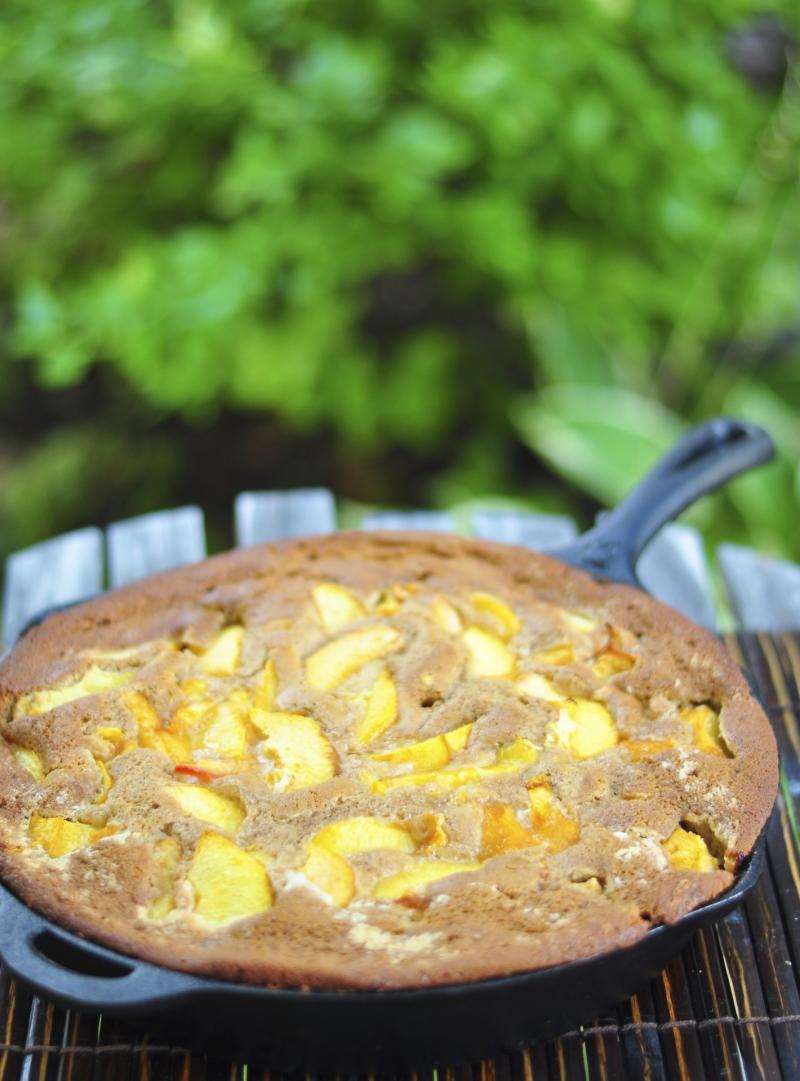 HOW TO KEEP YOUR DOG SAFE AT FAMILY GET-TOGETHERS 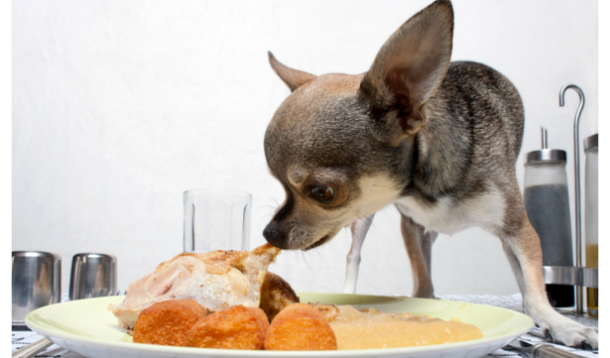 Canada is knee deep (if your neighbourhood looks anything like the savannah in my backyard) in the middle of summer BBQ season and Canadians are relishing every minute of the two months without snow. Because Canadians are a friendly bunch, you’re all probably having a steady stream of family and friends over to join in the festivities as you light up your BBQs, dive into the pool, and roast marshmallows over a fire pit. That means bathing suits drying on parasols and Uncle Stan passed out on a lounger while the kids doodle pink hearts on his forehead and plates with half-eaten hot dogs left on patio stairs. Food scraps are heaven for dogs, when they’re not making them sick.

At least 32% of Canadian families own dogs, so there’s a good chance one or more of you or your friends will bring labs, or pugs, or even Chihuahuas to a party. As long as the pups are invited and have good party manners — not eating other party goers is a start — the afternoon can be fun for everyone. As responsible pet owners, you’ll want to keep them on a leash or at least ensure they don’t steal ice cream cones from toddlers. Dogs can be assholes. You’ll also want to make sure they don’t eat anything that can harm them. The wrong food can be dangerous for dogs, even if Charlie regularly eats his share of socks and mini Lego figurines.

Let's clear up this one right away; your university party self might think it's funny to give a dog alcohol and laugh as he wanders around drunk looking for more glasses to empty, but you're not in university anymore. A dog's liver hasn't evolved to filter G&Ts or even beer like ours have so all you're doing is poisoning him. Even a small of amount of alcohol causes stumbling, vomiting, discomfort, a spike in temperature, and in extreme cases death.

The stronger the onion and garlic, the more severe the possible damage to a dog's red blood cells. While they like the flavour — What foods don't dogs like to eat? — eating anything in the onion family can cause anemia. Symptoms show up several days after ingestion, so look for signs of lethargy and darker (orange or red-tinged) urine and contact a veterinarian if symptoms persist.

Most people know chocolate is a no-no for dogs. The darker the chocolate the worse it is thanks to higher levels of caffeine and theobromine — the very parts that are healthy for us in moderation. Ingesting chocolate can cause heart palpitations, vomiting, abnormal thirst, stomach discomfort, and seizures among other problems. Chocolate is everywhere during special occasions so be vigilant about keeping it out of reach of counter surfers.

What's a picnic or BBQ without sweets and desserts? No place any child would want to be, and while kids pop jujubes into their mouths at a rate best not examined too closely, it's important everyone knows enough not to share these treats with the family pet. The sweetener xylitol used in many candies, gum, and some baked goods is toxic to dogs. It causes a drop in blood pressure, seizure, and liver failure. Symptoms include vomiting, lethargy and disorientation and you should bring your dog to your vet immediately since the result can be deadly.

How can anything as delicious as guacamole be bad for dogs? But dogs aren't alone in this, many of our family pets should never eat avocados since the persin in the fruit can cause respiratory and stomach problems.

The research isn't clear on why grapes and raisins can be harmful, but even small amounts can cause kidney failure in dogs. Many people feed their dogs grapes without any issue, but enough cases of illness have been reported to make it a good rule of thumb to avoid this fruit. If you want to feed your dog fruits that are healthy for them stick to melon, apples, blueberries, or watermelon.

Now that everyone is paranoid about bringing pets anywhere, just remember that while dogs can eat many human foods without harm, it's best to go prepared when going to a pet-friendly party. Keep your dog close, bring a (dog) food dish, have fresh water available, and don't share your ice cream cone with him. That's gross. Do you know what your dog's been licking?