The Indian Detergent Commercial Actually Written About Your Life 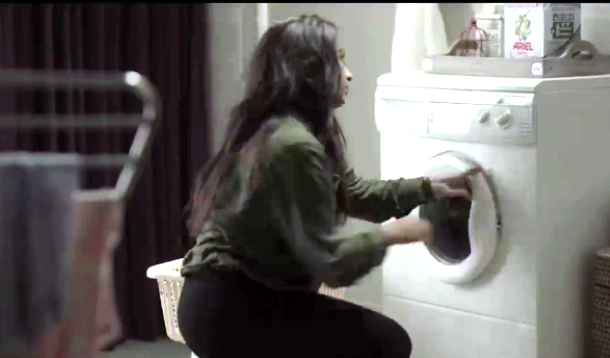 My husband is nothing like Wash My Green Shirt and Fetch Me Some Coffee dad in the ad. He is a hands on dad who once, when we had just moved in together, remained completely unmoved when I shared this new revelation with him from a lecture I attended: couples shouldn’t strive for a 50% - 50% kind of arrangement, they should each be putting in 100%. You see, he had already arrived at this conclusion himself.

Being the only children of divorced parents raised by our mothers, my husband and I may not have been exposed to gender roles quite in the same ways portrayed in the commercial, but we were sure witnessing a similar reality where by force of circumstance the women who were everything to us were doing everything, much like the woman in the commercial. Strip away the gender inequality issue and you get not such a terrible message to grow up on after all.

So why does this commercial hit so close to home then, and what is that lump in my throat?

Before heading upstairs last night to start the last chapter of my day with the kids, bedtime, I scanned my surroundings and felt that familiar sinking feeling that comes with the sense of being overwhelmed. Piles of stuff everywhere. A visual display of what went right but mostly wrong that afternoon. Evidence of boys playing, fighting, ignoring while their mother prioritizes chores. Harsh verdicts surfaced and were immediately repressed. Ain’t nobody got time for that. When I stay at home with the kids in between contracts, sometimes for periods that last a few months, while my husband is working full time, I often feel this way, overwhelmed and not in control. I am not the confident captain of our household who professionally steers our ship, but rather a frantic navigator who sees icebergs everywhere and constantly tries to avoid them. A Stay at Home Mom’s day consists of several categories: expected Sisyphean labour (the same dish that keeps reappearing only with different food stains throughout the day), unexpected Sisyphean labour (pee and chocolate milk puddle removal, reinstallation of batteries in tossed remote control devices), putting out fires (not literally but almost) and TLC (as in unwavering, bi-minutely emotional support). Recognizing during my last stint at home that I cannot continue tackling all of these categories simultaneously on my own, I’ve decided my sons were old enough at three and six years of age to start participating more heavily in sharing the load. I explain to them that when it comes to chores, it is not “MY job” but rather our mutual job, that we all want to be proud of our home when we invite our friends over. On weekends they get to see their dad contribute – I don’t want to use the expression “sharing the load” because that would imply that the load was mine to share to begin with, and I know he doesn’t view it that way. I agree with the commercial’s premise that kids learn primarily by example, and that is why the latter is probably far more effective than my rhetoric.

The Indian commercial is powerful and uplifting and tugs right at your heart. While we may not have all grown up in a household that’s an exact replica of the patriarchal model portrayed in it, I believe we can all connect with the message. Sheryl Sandberg, for example, praised the commercial on her Facebook page while focusing on long term goals and perhaps the career angle.

This is one of the most powerful videos I have ever seen – showing how stereotypes hurt all of us and are passed from...

I’m sure that many other women found other strong parallels to their lives, experiences and beliefs. What speaks loudest to me in this ad is the underlying message, the one that lies underneath the catchy hashtag #SharetheLoad. I spend such significant amounts of my days struggling to be heard. I constantly lose my struggle to the TV set, to flaring tempers, to the noise of two boys fighting and sometimes to more interesting things like Legos and games and the voices of friends. Share the load is a fantastic message which already happens to apply to my relationship with my husband. What I needed to hear, as a mother, in order to feel validated is that I AM HEARD - even without using all caps. By asking that we stop and notice how overwhelmed and overlooked she is, that we share the load, instead of treating the mother of the family as a function not a human being, Ariel India’s detergent commercial accomplishes precisely that.

Katia Bishops: The Designated Grownup How to Spot a Modern Day Feminist