Dear Jerks: Our IVF & IUI Children Are Not "Synthetic" 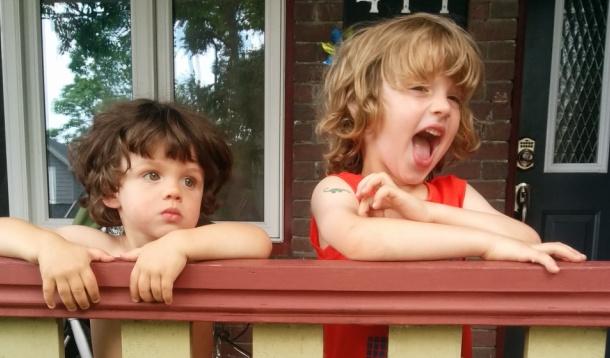 When I think of my two babies and their behaviors and physical attributes, there are so many adjectives that come to mind: mischievous, hilarious, touching, clumsy, graceful, bright, enraging, fulfilling, vulnerable, exhausting, inquisitive, and loving are but a few. Notice how I didn’t say “synthetic”? There is nothing synthetic about my children or the way they make me - or anyone else around them, for that matter - feel.  My children, your children, everyone’s children are for real. Kids are, in fact, the definition of “for realness.”

I remember talking to a friend overseas while I was on maternity leave with my first-born. It was a short while after giving birth and I was trying to describe to my friend, a young single guy, the amorphous, still very new and undefined feelings that came with the territory of having a baby. I remember trying to relay in words the incredibly fulfilling sense of realness I used to draw from running my hand over the smooth hard surfaces which constitute a newborn baby. I remember telling Jordan about the sense of marvel that I was overcome with whenever I brushed upon my son’s elbow or knee and on some unconscious level proved to myself by doing so that this magic is real. Kind of like pinching yourself.

Both my sons, 2 and 5, were conceived through IUI (Intrauterine Insemination) and yes, of course, I would prefer to have them naturally but when it comes to life, our preferences are often irrelevant. When I look at my boys, it’s never through the prism of the way they were conceived. Doing so, in my opinion, would be the equivalent of making predictions or judgements regarding your marriage based on your wedding ceremony. Who does that?

Well, look no further. The borders of ignorance were just expanded to accommodate the people out there judging my children based on their parents incapability of conceiving naturally.

You may have heard of the feud between Elton John and Dolce & Gabbana fuelled by the remarks the designers made regarding babies conceived through IVF and referring to them as “synthetic”:

"You are born to a mother and a father — or at least that’s how it should be," said Dolce. "I call children of chemistry, synthetic children. Uteri [for] rent, semen chosen from a catalog."

Yes, I realize that the ignorant comment wasn’t necessarily targeting my family. We were collateral damage in an anti-gay adoption rhetoric. All the worse. Consider this my rebuttal against ignorant views, wherever they are found.

Children born through IUI and IVF are born from love enhanced with determination. They are often born “despite,” not just “because” or “just because.”  They are conceived through perseverance and their mothers birth them in utterly non-synthetic ways and harbour non-synthetic feels - both physical and emotional. I promise you, even if those mothers are “uteri for rent.” And then the babies emerge to this world and they may join a “traditional” or “non-traditional” family and soon enough, before their parents can say “Dolce & Gabbana” these children will be talking and thinking and questioning everything around them and they will ask with eyes wide open, ready to absorb every morsel of information, how is it that they came to be. How are they here in this world, and their parents will sit down and have a very real family (traditional or non traditional) meeting and debate which version to discuss and once they’ve reached a decision to tell the whole story they will pray that no other child ever uses this information to belittle their own and make them feel like anything less than the utter wonder and endless discovery they are to their parents, and those parents may never suspect that it might be an adult who fires off the weapon of ignorance.

Children are anything but synthetic, regardless of how they were conceived or the family that chose to have them and love them. If it’s “good, traditional” family values that you are standing up for and set out to protect then consider this, I know no good and worthy family that disrespects its children and by referring to them as “synthetic” you’ve done just that.

Katia Bishops: The Designated Grownup Try This DIY: Bring the Beach to Your Breakfast Table