Halloween Parenting Tips For Dealing With Your Creepy Kids

What To Say When What Your Child Says, Freaks You Out 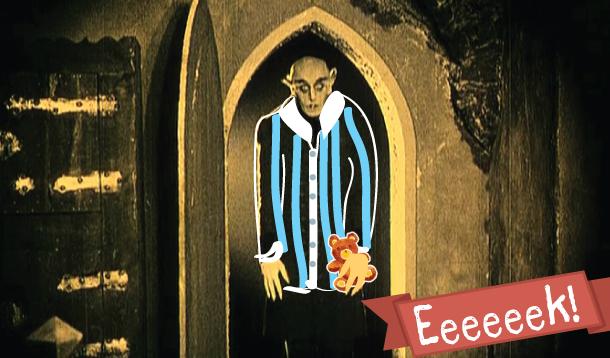 Halloween decorations and spooky books and specials can seem like no-brainers when we’re trying to look for triggers that might scare our kids or cause anxiety, but at the end of the day it can be hard to pinpoint what is actually setting off their fears.

As parents, we can’t be there every minute, and even when we are, it can be hard to stay on top of all the stories and information that your kid absorbs from everywhere else — play dates, preschool, you name it.

In separated families it can be especially hard to track what, where, and when kidlets have seen or heard something — even when everyone’s on the same page.

Since my ex-husband and I split, I’ve been hyper-tuned-in to my kid’s anxiety levels, but always felt pretty confidant with her healthy expression of that kind of giggly, ticklish, excited fear that all kids seem to have when they’re being chased around in safe, silly fun.

But things can change on a dime —kids process things quickly and sometimes we don't know exactly what they’re putting together as explanations for themselves when we're not there to explain or clarify.

As parents we can hold our kids’ hands, but we can’t be filters for our kids’ imaginations, and that can be scary for parents because we have no idea what is actually going to make them scared.

My kid loves the dark.

She loves dressing up.

Up until recently she loved skeletons too. And then…

“Mummy skeletons are what’s left after your skin falls off and your blood falls out and then you’re dead.”

“Yes. There’s a skeleton at my school.”

“Oh. Is it a decoration for Halloween?”

“Yes. And my friend says that it’s what happens when you die. Because you’re dead. And your skin and everything falls off. And there’s blood. And sometimes there’s worms. And you’re dead. And you come back and you make a lot of noise and you can’t even eat candy.”

At this point I could totally tell that my kid was terrified, but was it actually the decoration or the SUPER CREEPY conversation she had with her fellow 4 year old that triggered this sudden anxiety?

Was she scared of a festive prop, or of death?

How many years of therapy was I looking at?

And how the heck was I going to steer this conversation into a happy place when I was completely creeped out myself? Shudder. (“Are you mad? I am your daughter…”)

So I formulated my own, non-expert, parenting ‘Stop, Drop, and Roll’ equivalent for dealing with creepy stuff that my kid says, and now I'm going to share it with you.

If you are super concerned or anxious about something your kid says, they will know. They smell fear.

So stay calm, and treat it like it’s completely natural for them to be saying what they’re saying.  Because it is. You’re the one who’s creeped out.

Explaining the ‘creepy’, can potentially ‘un-creepify’ it.

And pumpkins are harvested in the fall.

And some people celebrate Halloween as New Years!

See? Learning educational facts about something demystifies it and shedding light on a topic might just help your kid feel more empowered.

Fear tends to be an emotion that freezes. Changing course and getting your kid to move, mimic, role play, or pretend, puts them in power and gets their focus on an activity instead of dwelling on a thought.

Here’s how I resolved the ‘skeletons…because you’re dead’ situation:

“Well..do you know where else there’s a skeleton right now that’s pretty awesome?”

“No….” Looking terrified Baby Girl burrowed into my arm pit.

“Inside of you! And there’s one inside of me, too. Cool huh?”

She seemed to embrace this fact immediately. “Yes and mine is very wiggly.”

“Well of course it is, but most importantly, without our own special skeletons we’d have a pretty hard time doing jazz or ballet or learning how to skate.”

“I know! Because without our bones we’d be like jelly.” She giggled. Oh what a relief to hear that giggle again.

For a few minutes we danced and 'jellied' around the room.

Of course later that day she told me that a 'Mr. Ghost' told her to draw things (AIIIEEEEEEEEEEE!!! Clenching. Every. Muscle.) but that, my friends, is another story.

What creepy things have YOUR kids said to you that makes your blood freeze?

What do you do that helps ease your kid’s anxiety or fears around Halloween? Has that changed if you've become a single parent or separated family?

Share in the comments below. I’d love to hear your stories!

Move over Robert Pattinson — the guy in the photo (who I added pjs and a teddy to) is a vampire screen legend! BAM.

Nosferatu is a public domain film (free for anyone to watch, present, or share in whole or in part) from 1922 (released 1929 in the US), directed by F.W. Murnau, with a screenplay by Henrik Galeen. It is the first ever motion picture that tells the story of Bram Stoker's Dracula.

The super creepy Count Orlok was played by Max Schreck. And he still creeps me out. So I am making this educational.

And now I'm going to run around the block to get myself active. *Shudder*