Confessions of a Film Set Mummy: On Location

Bending Time is A Kind of Exercise, Right? 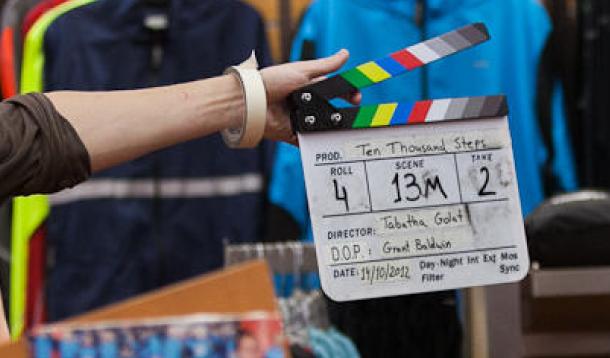 Sunday we were on location at the Running Room from 8am to 12pm.

We had 2 scenes to finish shooting in that time, the weather was wet, we had a ton of equipment to move into the modest retail space and set up... By day 4, everyone was feeling the wear and tear of long days so we were all featuring a bit more of an edge than usual.

The Vancouver location was perfect for us. Perfect. The staff was awesome and we even had a visitor from their head office in Edmonton drop by ‘the set’. It felt really good to know that we were going to showcase this awesome Canadian brand in our short.

The head of BC events was actually helping us move racks around and basically doing set decoration.

There was just one teeny tiny little thing. There was a running group at 8:30am, as well as a massive race pick-up scheduled for noon, sharp. Just to clarify, by massive they meant about 1200 people were going to be coming into the store to check-in, pick up their pinnies and other racing gear. We needed to be OUT by then.

Oh wait—don’t forget customers coming in and out. The store was open for business as usual. We didn’t want to be disruptive at all. Because really, how could a crew of 14, and a ton of cables, cameras, and lights be at all disruptive in a retail environment? Ha.

I was still scattered from saying goodbye to Baby Girl. That and the fact that I’d gotten a call from her dad almost apologetically saying that I’d forgotten to put her passport in her bag.

Of course I had.

I guess she’d sort of need that to get on the plane to Toronto. Balls.

I had decided to be ultra responsible and actually use the hotel safe at the Fairmont Waterfront for all of our important papers. Which was great, except for the fact that using a safe was not routine for me in the least. It was the one thing I completely forgot to empty. Of course I totally remembered to pack the extra baby shampoo and bath wash they gave me. Sigh.

Note to all working moms traveling with their kids—don’t try anything to tweak your personal routine while you’re away. Because seriously, in moments of total exhaustion you end up reverting to your basic, primal, non-safe using instincts. Just saying.

So at the end of a long day of shooting the night before our super early morning on location at Running Room, my awesome co-producer had to drive me out to the airport hotel strip so I could deliver my toddler’s passport. It was 1am.

And did I mention that my co-producer/impromptu chauffeur was also the writer and lead actor? So it’s not like he needed any rest. Cringe.

I have no idea how we did it, but between no sleep, a slow start, a stream of customers, interrupting door chimes, and avid Running Room runners and would-be racers, we actually managed to get all the shots we needed that morning.

The thing that kept the experience light and fun was the enthusiasm of all the Running Roomers from head office to the sales floor. It was contagious. They were excited to be a part of our project, and the feeling was mutual.

I was so pumped by their sponsorship and support that I briefly considered doing a running clinic. Briefly.

Then I realized that I should probably stick to running this production—at least for now.

Thanks Running Room! You guys rock. 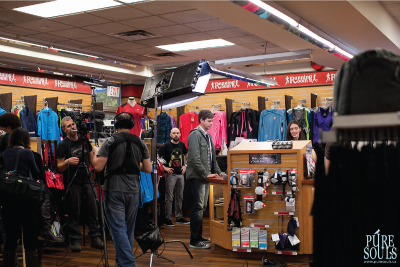 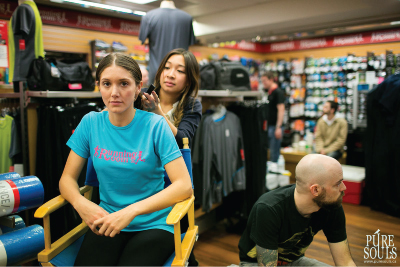 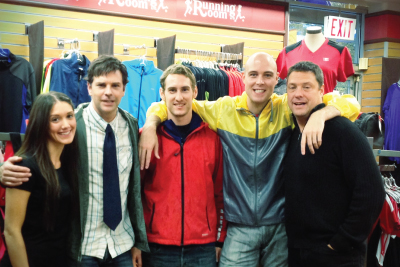 PS. A super huge thank you to Pure Souls Photography who captured some amazing stills and behind the scenes shots for us!