Quickie marriage and quickie divorce in the cult of Cruise 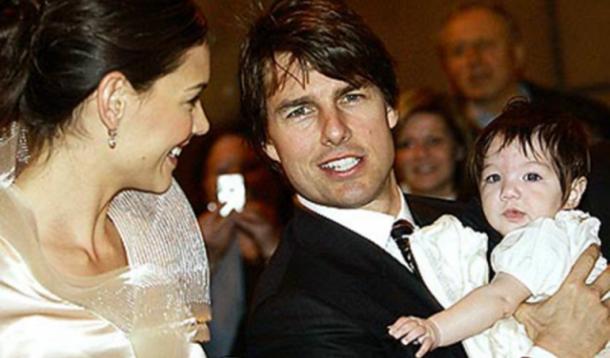 It was less than two weeks ago when we got news of Katie Holmes' surprise divorce filing in NYC to her mega-star husband Tom Cruise. There's been SO much speculation around this, I wanted to try and get all our ducks in a row for one nice, neat roundup as news today says that the couple have already settled.

The interesting thing to me is how quickly Tom settled. Why is it interesting? Well, most of the commentary swirling around the divorce has focused on Tom's very public (and often mocked) love of Scientology. The Today show reported last week that there were other actresses that the group "auditioned" before settling on Holmes (including Scar-Jo, Sophia Vergara and Penelope Cruz, who Cruise had already had a relationship with). But what's true? Let's get a little backstory.

Katie was enamored with Tom from a very early age and she seemed ready and willing to fill the shoes of a "good" Scientology wife. They quickly became an item and as we all remember, Tom did the CRAZY YELLOW COUCH JUMP on Oprah, followed quickly by a pregnancy announcement and fairytale wedding at an Italian castle. The rumours are that Katie was offered money for every year of their marriage, plus bonuses for every child born. No one is sure what may be the truth on the prenup, but with this settlement happening so fast, I assume some of it is at least partially right.

What I do find incredibly interesting is that Katie filed on a Friday while Tom was off filming (and on his birthday) and before he had responded, rumours were swirling that she would file for an emergency hearing in NYC. This would have posed a few problems for the notoriously private Tom. The biggest one being that the proceedings would then become public...which is where I think the Scientology aspect fits in.

Scientology is a notoriously secretive group, currently run by a man who some people consider to be a tyrant. This man, David Miscavige, is also Tom's best friend and a man who lavishes gifts on Cruise. Some people are speculating that at Miscavige's insistence, Tom was trying to get little Suri into a very strict Scientology learning program which would have seen her taken away from her mother and forced to go through "Audits." Recently, while Holmes was in China, she found out that Cruise had left Suri in the hands of some "Scientology people" that mama didn't know and that was what sent Katie over the edge. It appears Tom has been waiting for Suri to turn six—the youngest age in which Scientologists believe it is safe to audit kids and Katie realized she can't keep her baby safe from that while still married to the third most powerful man in the church.

So this has me thinking that being married to super-power Tom, knowing more than most lay-people might and Katie's attempt at an "Emergency Hearing" basically said to Tom "I know about your church and will spill it ALL if you don't give me what I want." And that made Tom scared. The same week Katie filed for divorce, L. Ron Hubbard's (the group's founder) granddaughter left the church, as did Miscaviage's father and his wife. Reports also surfaced that Miscaviage's wife has not been seen since 2006 (he denies this).

The day the divorce news broke, I said, "This divorce will be the end of the Co$ (Church of Scientology), whether or not Katie set out to do it." And, if sources are to be believed, that's probably not a bad thing.

So spill it, what do you think caused TomKat's divorce?