And I met a freaking Vulcan! 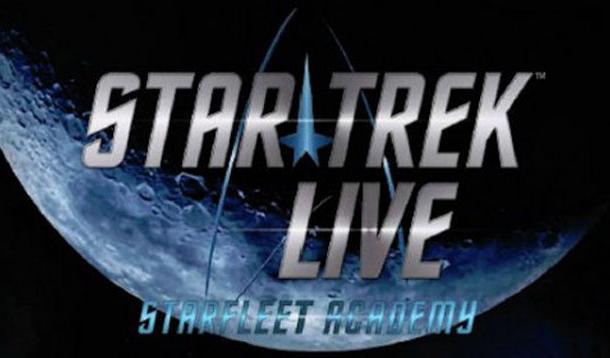 This past weekend, Star Trek Live opened here in Toronto at the Ontario Science Centre. So, of course, being a huge Trekkie (not Trekker...Trekkie), I jumped at the opportunity to check the show out, bring Henry to the OSC and MEET A FREAKING VULCAN!

We got to the Centre early, so that H could burn off some steam in the KidSpace (and hopefully sit still for the stage show—which absolutely didn't happen cause he's a toddler). When we went upstairs to the auditorium where the show is being put on, I was greeted by the Producer, Leonard Lipes from Mad Science Inc. We chatted a bit about the show, which he called "sneaky science" (love it) and a bit about the company (last summer, Mad Science held a CSI show at the OSC— interactive forensics!). However, we were here to see Star Trek Live—and Leonard let me know that the show played for two2 full years at the Kennedy Space Centre. I think that's a pretty glowing endorsement.

We settled in to the show, where we are greeted by Commander Sean Christopher because well, we are all new cadets at STARFLEET ACADEMY! Rick Simm, the actor that played the Commander was really great at well, commanding the audience. I don't want to give a lot away, but Voula, a Vulcan arrives on the scene to work with the Commander and us cadets to save Earth from some insane Romulans.

And there's not one, but two Tribble cannons.

I got to chat briefly with the actors after the show, and both Rick Simm and Theresa Noon (Vulcan Voula) were amazing to speak to. Neither were necessarily Trekkies before they signed onto the show, but because of the Q&A they hold after most showings, they've both had to learn a LOT about Trek (did you know, there's a Vulcan Wiki? I certainly didn't, and for that, I'm ashamed). I think my favourite part about meeting them was how excited and passionate about the show they both still are—they have toured and performed at Kennedy for a number of years with Star Trek Live and they both told me that even in doing four shows a day (yep, a day), they keep it fresh because they have the chance to interact with different audience members and kids (both big and small) every time.

I feel like I could talk about this forever, because it is a great way to teach kids about things like the International Space Station, the Hubble Telescope and even how our blood works! The actors are great—there is a third, Eric Fornier, who switches up and helps out so that Theresa and Rick get a break—and the special effects (run by Jason Holmes) are awesome!

H was able to sit through the show for about 15 minutes before my hubby had to take him outside, and there were kids as young as 3 or 4 really into the show. If you are heading to Toronto this summer or are already here and need a day of AC and learning, I can't recommend this show enough. And, it's free with admission to the Science Centre! Henry was too interested in the amazing replica tricorder to turn around for this photo with Theresa Noon (Voula) and Rick Simm (Commander Christopher).

Kat Armstrong: Celebritease Steven and Chris are in the Holiday Spirit