Monsters University Is Coming This Summer

This summer, school's in!

Monsters University Is Coming This Summer 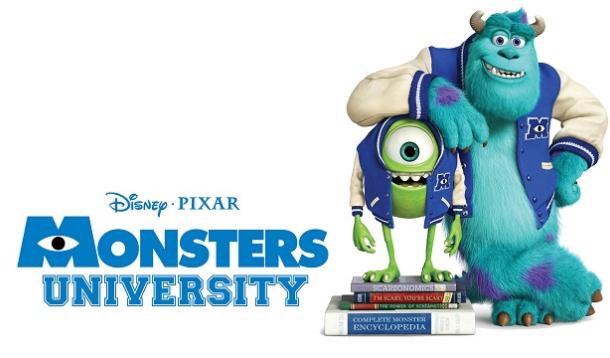 Just in time for the end of the regular school year for most kiddies, Disney/Pixar is releasing Monsters University; the story of our two favourite monsters from Monsters Inc and how they met in their college days. Turns out, Sully was a star everything in college, and Mike Wazowski was both jealous and worked very hard to keep up with his first-year roomie.

I'm pretty excited about this movie. I loved Monsters Inc when it came out, and am excited to see this new piece in the franchise. Pixar is doing some great stuff with kid's movies and I'd be more surprised if they didn't do the series justice. Hopefully, I'll be able to catch this in theatres at a Starz and Strollers (or similar movie day) with the new little baby, otherwise, I'm not sure H will sit through a loud dark theatre, or that I'll have the wherewithal to handle it with a NB and a toddler!

So, spill it! Will you take your kids to see Monsters University on June 21?

Disney has found itself in the news quite a little bit recently over the makeover it gave Brave's Princess Merida. How did you feel about this?

Each Celebrity Meltdown Seems Worse Than The Last I've been trying to avoid talking about this because it isn't so much a scandal, nor is it something that should be taken lightly. Amanda Bynes is in the news yet again. This time, for allegedly throwing a bong out of a car window to avoid arrest. After her arrest, erratic behaviour and court appearance, she says that police sexually assaulted her and that was when she was arrested: after she fought back against the assault.

This all started in 2011, when Bynes was first arrested for DUI in LA. Subsequent arrests lead to her having her lisense revoked. So, she did what no one would actually do; she moved to a different state. In her case, New York. Since moving, she's been forced to move out of a high-end apartment building for breaking rules, she's been video taped at the gym running on the stairmaster in flip flops, and she's taken intensely strange videos and photos of herself, all while attacking the media for making up stories about her and using bad photos.

At first, I think I sat back slack jawed like most others wondering what the hell was going on with Bynes. Then, I started thinking, "this isn't really funny." Now, I'm wondering where the hell her family and friends are.

This whole thing is just out of control, and with her arrest and bizarre court appearance last week, I wonder why her parents haven't rushed to NYC to be with their daughter.

I wish I knew how to help her, but I don't. I don't even think I could get remotely close to her. Even just writing this post makes me worry I'm adding fuel to the fire here, but I think we need to stop looking at celebrity life as passersby at a train wreck and more as active participants in life.

This will be the only time I write about Miss Bynes until she gets the help she so clearly needs. I don't want to continue to vicitmize her and I'm making a pledge that any other celebrity news like this will not be fed by me. Instead, I'll post about great things celebrities are doing. And I'll continue to talk about mental health with friends over on twitter on a very regular basis. Because it's more important that we normalize mental health and not stigmatize it otherwise more and more celebrities will end up in worse and worse shape as is evidenced by the Britney-Lindsay-Amanda trajectory.

And if you see someone having a crappy day, or you haven't heard from a friend in a while, reach out. Just say hi. Everyone needs some help, sometimes.

I just wish that someone would do the same for Amanda Bynes.

So, spill it! What do you think about Hollywood scandals that center around mental illness?

Younger man has a little something extra for her pleasure When I read this news today, I started grinning ear-to-ear. I'm not exactly sure why, but for all the struggles Demi Moore has had over the last few years, something about this has made me chuckle to myself. I think I may have actually said, "Get it, girl!" out loud at my computer.

Anyways, Demi Moore seems to be very much into younger men. And her new guy is no exception. Last month, Moore went on a 3 day yoga retreat in order to become a certified Kundalini Yoga instructor. There, she met a 30-year-old Australian whose day job is "Pearl Diver" (I think he hunts for wild pearls?). He's hunky, blonde, and bendy. But he's got something a little Moore (I couldn't help myself!). Apparently, young master Will Hanigan had a real pearl inserted underneath the skin on his penis. Basically, he's a walking, talking "ribbed for her pleasure" sort of guy. The genital beading thing isn't new, as it's fairly common in the body modification community, but I've never heard of anyone putting anything other than industrial grade hard silicone under their skin. So, for me, that's a first.

Hello! Magazine has a photo of the hunky dude, as news of the romance as well has his *ahem* family jewels makes the rounds on the internet. Like I said, something about this story is just great and I'm having a very fun time reporting it to you guys.

So, spill it! What do you think of Demi's newest flame?