Here are some of my favourites. 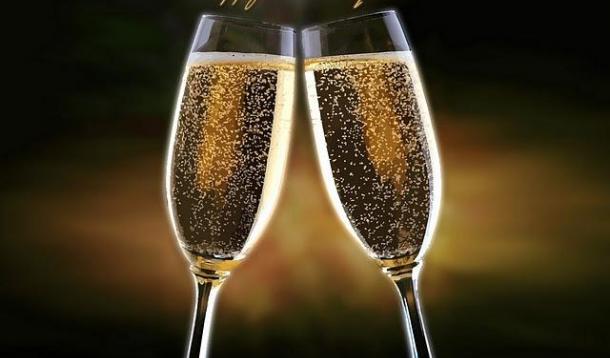 As the year is drawing to a close FAR FASTER than I even anticipated, I thought we could take a moment and talk about some of the crazy stuff that happened this year. From Beyonce being accused of not carrying her own child, to plastic surgery nightmares, 2012 was no slouch. Here are some of my favourite stories from this past year. Maybe some of yours made my list!

Jessica Simpson has her baby - and boy, did the media treat her terribly. I saw things from "She's 20-months pregnant!" to "How much bigger can she get?" and even "This kid's gonna walk out of her!" I found the whole thing despicable, especially the way she was compared to Hilary Duff. Two totally different women, two totally different pregnancies and yet the media, men and women alike really treated her awfully. Now that she's pregnant again, I have already seen some unfair comments about gaining baby weight. Let's hope we see less pregnancy shaming for Jess now.

Magic Mike - My personal Highlight of 2012 (you know, besides my child turning 1 and getting pregnant again).

Lindsay Lohan continues to meltdown - I can't believe she's had this crazy of a year! And it just seems to be going on and on. I think the worst part of it is that she's headed down a street we watched Amy Winehouse go down earlier, yet no one in the media is bothering to stop and see what they are aiding. While I'm rooting for LiLo, I don't think the unfair media attention is going to help.

The Jackson Family Drama - This flared and died down so quickly this summer and we have barely heard a peep from the Jackson clan since mid-August. Paris, Prince and Blanket are getting older, so it'll be interesting to see what goes on with thme in the next few years. And with Lady Gaga purchasing a large portion of MJ's collectables at auction this year, who knows what sort of relationship may come between the Jacksons and Stefani G.

Kelsey Grammer's unique parenting choices - I got criticized for calling out Kelsey and his wife for taking their newborn daughter to the Playboy mansion, but less than a month later, the two had their child unbuckled (sitting in his wife's lap) in a car driving on a freeway in LA. These two are being reckless parents. You'd think a man with older children would know better than this. And his wife? What is she thinking?

Kristen Stewart and Rupert Sanders - I am slightly surprised at how easily Stewart survived this scandal while her co-adulterer's career seems all but over. Makes me feel like this was, in fact, a bit of a set up on her part. They managed to destroy a family with children, regardless, so that's who really suffers. Although Sander's ex Liberty Ross seems to be doing just fine.

Celebrity Divorces - There were a few that were quite the surprise. From Will Arnett and Amy Poehler to Danny DeVito and Rhea Pearlman, this year's divorces were shocking, sad and surprising. Add Katy Perry and Russell Brand, TomKat (that was CRAZY) and Heidi and Seal, and you've got a year we could have proclaimed love had died in.

Women gained ground in Hollywood and fashion - And I'm not just talking "became more powerful." Women like Robyn Lawley and Kate Upton have become household names, and they are average-sized girls! They say the average North American woman is between a size 10-14, and both these girls have the bodies to prove it. While there has also been an uprising in the pro-anorexia movement, seeing Kate on the cover of more than just SI, and Robyn becoming the face of Ralph Lauren is an amazing leap for true beauty. And yes, these two are insanely beautiful, but part of their beauty comes from the sheer fact that they represent a greater portion of the female population than supermodels like Kate Moss do. All women are beautiful, but seeing more like Jennifer Lawrence and Rebel Wilson on the big screen and in magazines is a refreshing change.

So, spill it! What celebrity stories were your favourite in 2012?

Even in pregnancy, they look different—but you can, too! 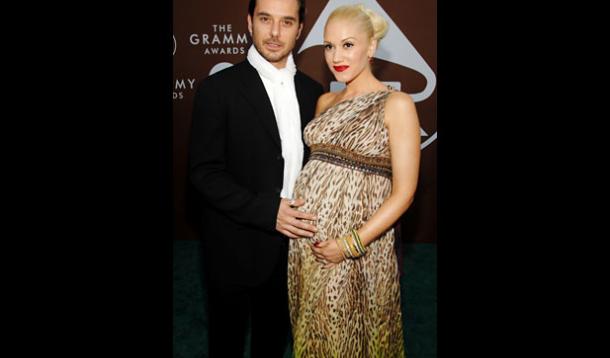 For those of us in Canada, Boxing Week is upon us. Sales, deals and steals abound both online and in stores. For those of us that are pregnant, there's no better way to stock up on some pregnancy friendly fashion without breaking the bank—and we can look just like the celebrities do when they're pregnant!

One of the best things for the growing belly is leggings—especially in winter, layered with tees, sweaters and booties, they are great. But you don't have to break the bank on very expensive maternity tights. You can buy amazing maternity-style leggings from a number of different retailers. All you need to look for is the term "high waisted." Pair with a long tee, a jacket, scarf and some jewellery, and you look like a million bucks. Like Hilary Duff did while pregnant: 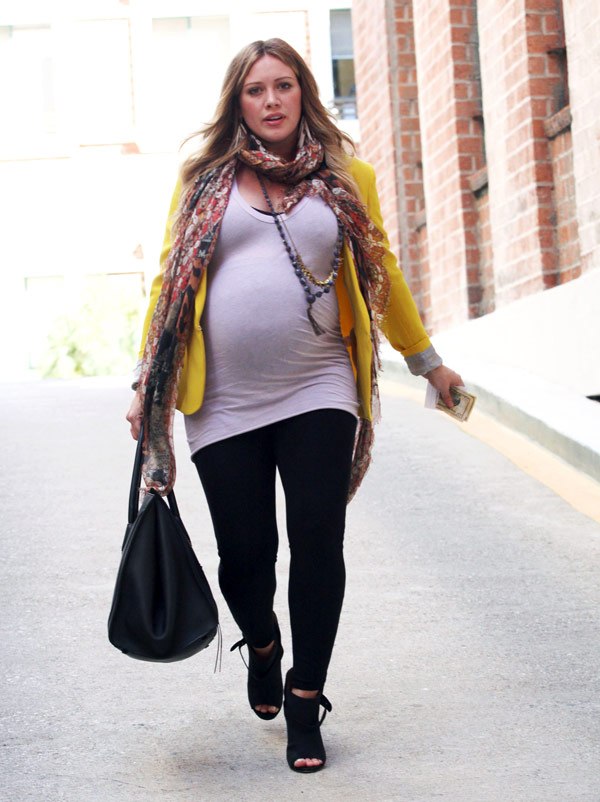 My favourite leggings right now are available at Urban Outfitters and are often on sale for 2 for 30. I have a black pair and a grey pair. I love them.

The other trend you'll see celebs rocking while pregnant is the skinny jean. And not the skinny jegging either—the straight-up jean. I often wondered how they did it while I waddled around in my terrible maternity jeggings when I was pregnant with Henry. It wasn't until the end of that pregnancy that I learned about the Belly Buster. This thing retails for about $15 at Babies R Us and has both button and hook and eye closure for dressy work pants. Throw this on with any of your pre-baby jeans (or a pair of inexpensive one size up jeans from Old Navy—I got two pairs early in pregnancy, and I'm rocking them!) and either a long tank or a Bella Band on top and wham! You've got pants through pregnancy and then some. 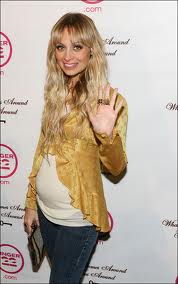 (These are NOT maternity Jeans)

One of my absolute favourite things about this year's celebrity pregnancy trends are the billowy tops. You can get them all over these days—from Old Navy to Club Monaco and back again. You can pair these with any sort of cardigan you want in winter (which is awesome because you can just buy a regular old cardi!) or be all flowy and boho in summer.

Rachel Zoe, celebrity stylist pulled this look off so well during pregnancy: 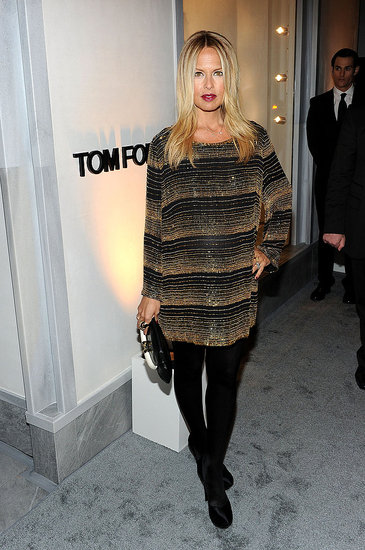 These are just three examples of the ways celebrities are able to dodge the boring (albeit practical) day-to-day of maternity wear. And it doesn't have to break the bank either. I just bought myself an adorable A-Line dress in pale pink with black lace from H&M for $15 and a white and black lacy-satin dress for 19 from Urban Outfitters. AND because they are classic and simple, they'll be wearable post-June baby.

And remember, just cause you're pregnant, don't be afraid to keep up with fashion and style—celebrities don't, and can't. Mamas need to feel beautiful before, during and after pregnancy. Babies shouldn't stop us from looking awesome.

So, spill it! What do you think of materinty fashion and how celebrities stay in-style while their waistlines expand?

This wasn't the family comedy I was expecting 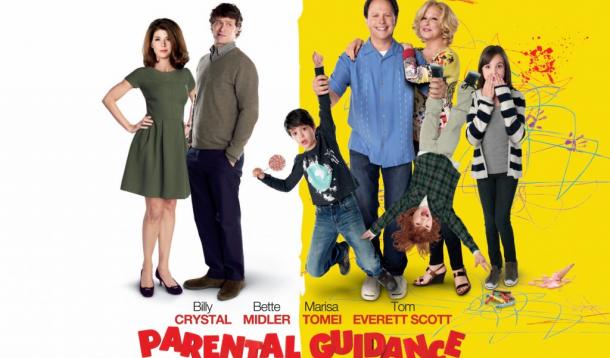 It was so great to be invited to a YMC event just before Christmas and catch up with a bunch of other yummy mummies this Wednesday to see Parental Guidance starring Billy Crystal, Bette Midler and Marissa Tomei. I haven't had a stomach for much since the horrific events last week in Newtown, CT and really needed to get out and catch up with some friends before this crazy year comes to an end.

But I have to be honest, the movie as a whole just wasn't for me. There are some definite cute bits—the kids are AMAZING (especially the youngest little guy. His facial expressions are darling)—and Crystal and Midler's characters remind me a bit of my in-laws (especially in the sense that I think they don't get our "parenting style").

The premise is simple, and you can see it from the trailers. A couple wants to get away for a week, but the husband's "good" parents are unable to come watch the grandkids. So, against mum's better judgment, she calls her whacky parents to come watch the kids. Mum and dad are "new age." They don't eat meat, don't give their kids "any sugar" and are sort of wet blankets. Mum, the business woman, is portrayed as overly dramatic and pushy, forcing her kids into all sorts of stuff that she wants for them (why is it that mums that aren't housewives are always portrayed this way?) but not actually doing what's best for them. Hubby is sort of just around.

Grandparents? Well, they're old school and don't understand what drove their daughter away. It's briefly touched on but never explained.

The idea is very cute—new school versus old school parenting styles—but what we get here instead is cultural stereotypes about men and women, minorities, and "new-age hippies," most of which are kind of insulting. Bette Midler and Billy Crystal are passable as the grandparents and of course, The Divine Miss M sings, and Marissa Tomei is beautiful as always (and looks A LOT like YMC founder and publisher Erica Ehm. Like they could seriously be sisters).

I think my favourite part of the whole night was just being able to get out, though, and not have to dodge news items on TV or radio and just get back to normal. Something we can all use on days like these.

Happy Holidays, everyone and here's to a better, safer, and happier 2013 for everyone.