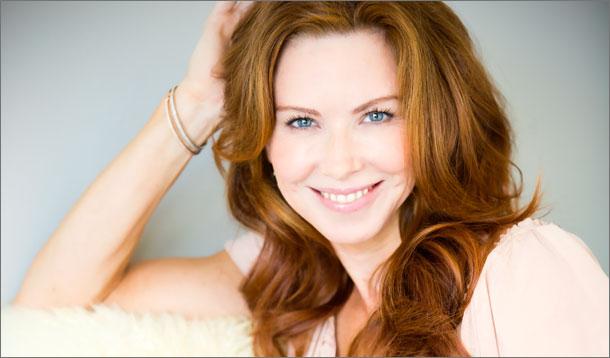 Last week, I got the chance to sit down on the phone and chat with Challen Cates,  star of Nickelodeon’s Big Time Rush (parents of teens and pre-teens will know her as Mrs. Knight on the show) . Cates is lovely to chat with and we talked about everything from the show, BTR to motherhood and the pressure to stay gorgeous in Hollywood.

Can you tell me a little bit about Big Time Rush and how you got involved with the show?

It’s about four boys in a band from Minnesota who move from there to LA to be in the next big band. I play the mum of Kendall. I knew the casting director and she brought me in on this show.

What’s your favourite part of working on the show?

The sense of family and collaboration. It’s a really fun and loving environment and we all genuinely like each other and care about each other. We have a great time. I always look forward to going to work because I know it’s gonna be fun, and enjoyable…and funny. I’m lucky.

Do you go on the BTR Tours ever?

The boys are great performers—I’ve gone to see them in concert and I took my kids and my husband and we had a great time. I was so proud and I couldn’t believe when I looked around the room and all of these screaming fans and I’m looking at these four guys and thinking about our first table read and how far they’ve come in such a short time. But yes, they go on tour and the show goes on hiatus. They are going on tour in July, and once they come back, hopefully we’ll be doing another season. I’ve seen almost every famous rock band and they (the boys in BTR) put on a good show.

What’s it like working with the guys? I’m sure that teen girls must want to ask you that all the time.

You know, it’s fun because they have so much energy and enthusiasm and it’s really infectious. I love working with all four boys in the same scene and you hold onto that energy the rest of your day. It keeps me feeling young and keeps me hipper with stuff I would have no idea with otherwise. It’s very energetic and just great.

I know that last summer, a BTR comic was produced—were you involved at all?

I didn’t know about it at all! I had no idea. That’s very cool though!

What’s it like being a working mom in Hollywood?

(Laughs) ummm. It’s well, it’s challenging because as any working mom knows, it’s challenging to manage your schedule because you want to spend as much time as you can with your kids but you also want to do a good job at whatever your job is. So it’s always a struggle to find that balance and I rely on a lot of other people in my life so I can focus more on the kids. I’m really fortunate that I work on a kids show because it's a kid friendly set and the kids have come to visit. They love Sierra, who plays Katie, who’s come to baby sit them a couple of times. I’m fortunate to say that my kids are a part of my work life as well. They benefit from it. I’ve taken them to the kid’s choice awards, my kids came to the set of the Nickelodeon show “figure it out.” They took slime to school for show and tell, so, I guess that’s the only part that’s different—we’re in Hollywood and my kids get to benefit from the fact that I’m on a kids show.

You have starred in and produced two movies—that’s like a 5th hat to wear: did you think you could get through it all?

I know, right? It’s crazy. I’ll tell you how I did that – I did it before I had kids. I was really able to focus on that. I would love to produce another film and I have been reading lots of scripts and trying to find the right project. And this time, I think, it would just take longer…a longer prep time. Cause I have less time so that’s the only way I think it could happen.

There is a lot of pressure in Hollywood to stay thin and young—do you think that pressure has affected you?

You know, it certainly does affect me, and I do feel it. And it’s hard to see yourself on camera all the time and see photographs of yourself and you're watching yourself age. And there’s no way that I can say that it’s not challenging. But I try and live a healthy lifestyle and I don’t believe in doing anything to extreme—I believe in moderation. I work out, and eat healthy and I try to have fun and I think that reflects on how you look. If you are enjoying your life, you look a lot better.

What lessons have you learned about the industry that you’d like to pass on to your children?

You know, I think it’s probably, and not specific to the entertainment business, just "Always Be Prepared." I’m always prepared when I go on an audition and go to work. Be prepared, be on time and be professional. I think all those things are important it doesn’t matter what you are doing. And treating everyone with equal kindness.

What would you do if one or both of your kids wanted to become actors?

Maybe I would cry. No…oh. It could happen. I need to prepare myself for this. I would, um, if that was what they absolutely wanted to do and there was nothing else that was pulling at them, I would be supportive and I would do everything I could to help them in their pursuit. And I would also caution them of the difficulties of being an actor, the challenges and how emotional it can be. I don’t want to say heartbreaking, but there is so much rejection and it is really hard to handle the rejection.