Oscar Nominations 2014: The Good, The Bad, The Snubs

And I'm starting to feel a little underwhelmed with Hollywood 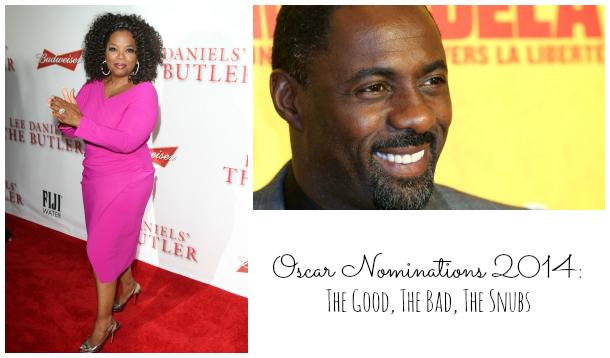 So, this past Thursday, The Academy announced this year's Oscar Nominations, and I have to say, I'm starting to feel a little underwhelmed by the choices of the Academy year after year. Don't get me wrong, I love the pomp of the ceremony: the dresses, the drama, all of it. But maybe it's my involvement in pop culture, or the fact that I'm getting older (and more disillusioned), but the awards seem like a really big MEH this year.

Yes, there are some standouts, like Spike Jonze Her and Brad Pitt-Produced 12 Years a Slave (including the nomination of Lupita Nyong'o for Best Supporting Actress) but Idris Elba was completely snubbed for his portrayal of Nelson Mandela in A Long Walk to Freedom (even though U2 was nominated for Best Song for the same movie). The Butler was completely looked over, even though at the time of it's release, people were buzzing about Oprah's performance and how they expected she would be nominated. Yet, nothing.

I have to say, overall, the Oscars seem more "white" and more "cookie cutter" than in previous years to me. And that's not for lack of fantastic films and productions by people of colour in Hollywood in 2013. But, since the Academy is made up mostly of previous winners, and most previous winners are white males, I guess they go for exactly what they like.

Do I think that Matthew McConaughey is a bad actor? No way. Do I think he's undeserving because he is a white guy? Nope. But do I think there are actors of colour who had as good if not better performances than his in 2013? Yep. And really, does Meryl Streep need to win ANOTHER Oscar? Let's just stop nominating her because she's Meryl Fucking Streep. SHE'S THE BEST, WE GET IT (I love you, Meryl).

I'll watch the awards show, I'll make predictions and I'll #YMCOscars night of the show along with all of you, but I hope that in 2015, we'll see more diversity, more difference and less of the same old same old.

What about you? Do you think The Oscars are a great indicator of the best in Hollywood, or is it getting old hat?

Short Film (Live Action)
"Aquel No Era Yo (That Wasn't Me)"
"Avant Que De Tout Perdre (Just before Losing Everything)"
"Helium"
"Pitaako Mun Kaikki Hoitaa? (Do I Have to Take Care of Everything?)"
"The Voorman Problem"

Sound Editing:
"All Is Lost"
"Captain Phillips"
"Gravity"
"The Hobbit: The Desolation of Smaug"
"Lone Survivor"