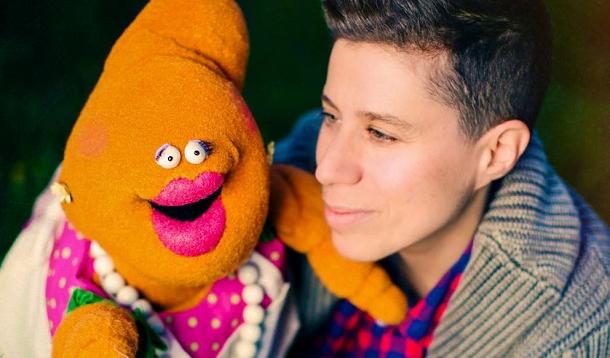 A while back, we noticed that Ali Eisner, puppeteer, musician, writer, director, and creator of CBC's famous Mamma Yamma announced that she was leaving CBC. My first thought was that it was a real shame because we really adore Mamma Yamma around here. And since Matt grew up with, and is close friends with Ali's wife Christine, we felt a great connection to the character that was more than just a puppet. Mamma seemed to just be Ali in yam form. Hell, she even used to take the yam to take family photos with (the best) Santa at the Dufferin Mall in Toronto. Mamma's won awards and hearts and I thought it was a damned shame that CBC was losing such a gifted artist/character.

Except they decided only to let go of the first part. Very recently, I saw a newer segment during the interstitials (the little live-action bits between shows). Mamma was in it, but it wasn't Ali behind the felt. And yes, I noticed. Immediately, in fact, I noticed. I noticed that someone else was working very hard at an approximation of the character, the voice and everything Mamma, but that it wasn't Mamma. Not by a country mile.

So, I did what any good pop culture writer would do, and went straight to the sources: Kim Wilson, head of Kid's CBC and Ali Eisner herself to find out what happened, and where the Yam went.

When I spoke to Ali, I have to say that it really struck me that she is as sad that she had to let Mamma go as I am sad for her. She told me more than once, "Mamma is me. She's me in a puppet." And her warmth, kindness and bravado are all very familiar. Very yammy. She told me that she felt like she needed to move on as the shift at the CBC wasn't something that was jiving with her creative drive and that it was excruciating to have to leave her workplace of 6 years and the home of, arguably, Canada's most famous puppet. I asked her why they didn't retire Mamma when they have 6 years of remarkable footage and a number of other fantastic, lovable puppets to choose from and she couldn't rightly tell me why.

I put the same question to Kim Wilson, and she said that a decision was made some time ago that the CBC would, "focus on one puppet that the kids could really get to know and spend time with." That was Mamma. It seems that they have all but retired Saumon du Champlain, Capitan Claw, and Liza and Baron Von Fruge (the best little guy) and were really trying to focus on Mamma even in light of the fact that Ali left the Ceeb.

What struck me in speaking with both women is that they both feel totally different about the situation. Ali is really bummed that Mamma is now being handled by another puppeteer, while Kim is excited about the future. Kim told me that she doesn't think that kids can tell the difference in puppets, but I'm pretty sure that if you show any kid footage of Jim Henson doing Kermit, then show them footage of his son doing Kermit, they will all notice that Kermy is "different." Just like I could tell instantly that Ali wasn't doing Mamma the first time I saw the new puppeteer.

And that's not to say that the puppeteer is bad, but it's just not the same. And I can't imagine how physically and mentally challenging it must be for that puppeteer to have to try and fill those yam's shoes because Mamma was such a well rounded character. Kim brought up the fact that Kevin Clash has walked away (for now, at least) from pupeteering Elmo. And while this is technically true, I've heard it through the grapevine that Sesame has put Elmo mostly on the back burner for the time being. I also know that Sesame has puppeteers who have trained extensively with Clash in order to bring Elmo to life when he cannot. And while the situations as to why the puppet's creators are walking away are vastly different, Kim Wilson argues that at the end of the day, it doesn't matter.

And maybe it doesn't to her, but it does to me. I personally loved watching Mamma/Ali work, the bands that came in and all the rest and it just doesn't feel the same to me. I hate to see a character change like this without any explanation or notice, and it also chafes me that with Ali's departure from CBC, they decided to keep going with something that was wholly her creation. But that's just me.

And maybe it's my personal connection to Ali (and subsequently, to Mamma Yamma) that makes me feel this way, but I'm a nerd through and through and I don't like it when my stuff gets messed with.

So spill it! What do you think about Kid's CBC's decision to move ahead with Mamma Yamma and not her creator?