We may be a ways off, but this could be your Christmas show stopper 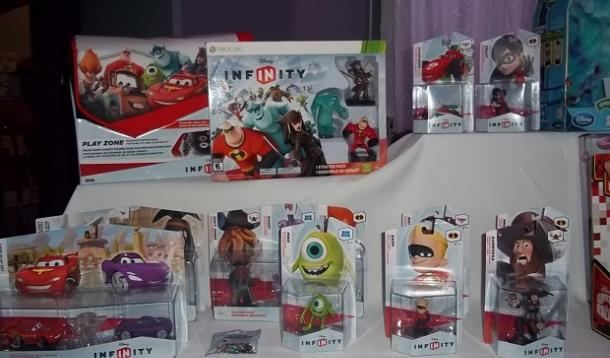 Lastst night, we got to try out Disney's new Infinity gaming platform here in Toronto, and when the good folks at Disney Interactive first announced it, it sounded intersting but I was confused as to what exactly it was and how it worked. Playing some games yesterday and speaking to Kevin, one of DI's developers, I have a much better idea, and I have to say, that this could be the perfect all-in holiday present for your kids. Especially if they are into video games AND Disney.

It works like this: Disney has developed a number of games around characters from their movies (such as The Incredibles or Pirates of the Caribbean) and the games come with action figures which are used as characters in game play. The games can each be modified by adding in pieces from other properties, like, say, Alice In Wonderland's forest in the middle of The Incredibles. You can also add characters from different movies into games to play, such as, say, Mr. Incredible in Monster's University. You can use tokens to enhance game play or even build your own levels/games which can then be shared with the Disney Interactive community the world over. This isn't just passive game play. This is imagination in the computer age.

You are able to swap your characters in and out of games by placing beautifully made figures onto your game board (which plugs into a Playstation, Wii or XBox) and each character you have the figure for will also live digitally in your Toy Box — the place where creativity really happens.

And while the price tag isn't low, I think I'd rather invest in gameplay like this, with it's infinite options, than 1 game that will be completed and tossed within a year. The basic starter comes with Jack Sparrow, Sully, and Mr. Incredible as well as their movie-connected games. There are also supporting character game pieces that can be purchased. As this year and next progress, Disney will release more games and more figures, allowing for a fully customizable universe that will only become bigger and more imaginative.

As a parent who enjoys video games myself, I've been struggling recently with how to introduce such a passive activity to Henry while teaching him about active games. But Infinity does a lot of that for me. He's still too young to play, but I'm betting that in the next few years, as his dexterity improves and he wants to actually start playing games, that this will be a perfect way to introduce him to the world of gaming.

So, spill it! What do you think of Disney Infinity?

Kat Armstrong: Celebritease How To Meet Your Idol