Tweens solve mysteries with edutainment and a charitable twist 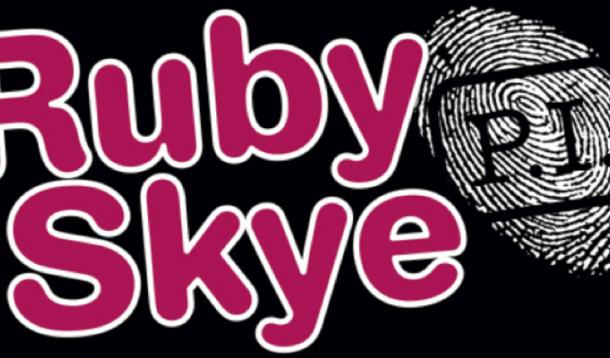 Ruby Skye PI is an online-only show for tweens and teens where the titular character has to solve a mystery that spreads out over the course of the entire season with the help of her younger sister and some surprising clues/characters. I had a chance to chat with the show's writer-producer, Jill Golick about the show's second season, what makes Ruby so special and their special connection to the I'm Just a Girl campaign for season two.

I’d love to hear a little bit about the back story of Ruby Skye PI – The show is going into its second season, how did the first season come about?
I’ve always loved tech and the web. I have been playing around with experimental storytelling using social media since 2007. I love the challenge of figuring out how to use this new medium to tell stories. I have been a television writer for more than 30 years and have written lots of children’s television and lots of mystery. My writing partner Julie Cohn and I had developed a story about female teen detective and a mystery involving an email scam. In 2010, when the Independent Production Fund had their first call to support the creation of web series, I decided to submit that idea. In June of that year, we got the word that the IPF would support Ruby Skye P.I.: The Spam Scam and the adventure began. We went to camera in August and had the show on line in October. We were so thrilled with the experience, we decided to do it again. Ruby Skye P.I.: The Haunted Library launches October 10 with new episodes
Wednesdays for nine weeks.
What are some of the goals when creating a season of Ruby Skye PI?
Our number one job is to tell a great and entertaining story. I wanted to recreate the kind of story experience I had as a kid reading novels – the ones where you get to the end of the chapter and you need to read another chapter immediately. So we were trying to make the video version of a page-turner. We want our characters to look like real kids. We know kids are bombarded with media images of people with perfect hair and perfect bodies. We want try to give our audience a mirror so that they can see themselves in the characters.
Ruby is a very strong female character – was it always set that your lead would be a smart, strong girl?
Yes. For much of my career as a children’s television writer we heard the conventional wisdom “girls will watch boys shows but boys won’t watch girls shows.” I always found that a frustrating environment to work in. I think we in the media do a huge disservice to our daughters. We feed them a steady diet of shallow and stereotypical images and characterizations of women and girls. Not everything, but a lot of it. I love female characters who are daring and driven by something entirely internal, like Ruby’s crazy
curiousity.
Tell me a bit about how you got connected with the Because I’m a Girl campaign.
One of our big goals with Ruby Skye P.I. is to introduce kids to organizations that are working for the greater good – environmental, pro-social and kid-focused causes. We want to show kids simple things they can do to make the world a better place. I personally am a big fan of the work Plan is doing with Because I Am A Girl. I’m so inspired by their campaign to “unleash the power of girls”.
In addition to the storyline involving Because I Am A Girl, we have a real life fundraising campaign going on. You can make a donation to our campaign right here, through Hailey’s Tumblr or directly on our fundraising page.
Why do you think it’s important to connect with tween and teen girls and do you think you’re filling a gap for this type of female lead?
It’s a great age. Difficult to live through, because everything is incredibly important when you’re a teenager. But that’s what makes this age group’s stories so compelling. It’s also a formative period, a lot of ideas about who you are and who you can be are formed in these years. Having stories and characters in your life who show you a wide range of human possibilities allows kids a safe way to imagine different futures for themselves.
What’s it like working with all these talented kids?
Delightful! They are full of energy and optimism. The younger members of our cast – Madison Cheeatow (Ruby), Marlee Maslove (Hailey), Elena Gorgevska (Diana), and Scott Beaudin (Edmund) – are all extremely professional. In our first season, we took a little extra time to shoot things and added lots of rehearsal into the schedule. This season we found we didn’t need it. We shot The Haunted Library at night – from 5 pm to 6 am. I have to say the younger cast members handled the all night shoots better than a lot of the adults!
Ruby Skye has won numerous awards for web-series; any plans to take this show to television?
We would love to bring the series to television. I think some of the interactive elements we’ve included in The Haunted Library would work extremely well with TV’s trend toward “second screen” experiences. The television offerings for this age group over the last few years have been mostly animation and sitcom, but maybe the time has returned for family oriented mystery. We’d love to find a broadcasting partner who is ready to try something a little different.
Where can we check out Ruby Skye PI?
You can find Ruby Skye P.I. on YouTube and wherever fine video is shared. For the best experience, watch it on our website RubySkyePI.com. The first mystery, The Spam Scam, is online in its entirety. Our second season, The Haunted Library, premieres October 10th with a new episode every Wednesday
until December 5th.
I'm a big fan of the idea that someone's actually thinking about tween girls and their appearance in the media - and that the show, while focused on a female lead isn't only for girls. And the Because I'm a Girl campaign is something that is helping young girls the world over in many different ways.
Spill it! Have you watched Ruby Skye PI with your kids? Will you start?
Category:
Culture - Television
Tags:
Ruby Skye PI
tweens
teens
Because I'm a Girl
Kat Armstrong
Celebritease