A sweet soda treat without all the additives, artificial flavours or colours 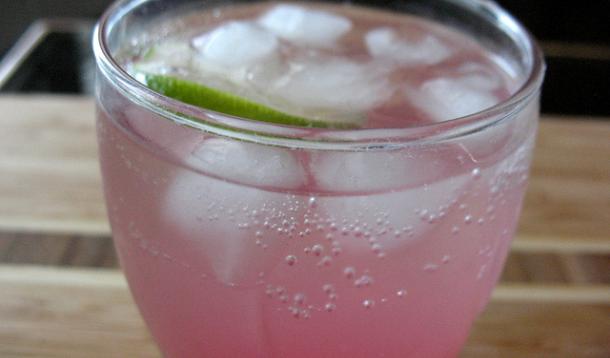 When Kevin was small, we used to visit a coffee shop where he could get an Italian soda-club soda and ice, topped with a flavoured syrup. He loved them more than canned pop, but they were often a bit pricey so became a family treat when Mom and Dad went out for coffee. I loved that he could play around with the flavours, but sometimes the syrups had artificial colors and flavours that I wasn't too happy with.

Recently we discovered how to make some of our own syrups, and began mixing and matching them here at home. What I love about making them yourself is that not only are they very easy, but you get to control the sugar and what else is added. All you have to do is boil a bit of fresh fruit or juice with sugar and water, let it cool, then store in a jar in the fridge, ready for when you want to make a drink. Don't even stop at drinks, these fruit syrups are delicious over pancakes, ice cream, or even drizzled on cheesecake. The best part? No colors, flavours, or preservatives added.

When the temperatures are soaring and you want something fun and cool for the kids to drink, skip the pop and let the kids put together their own sodas with fresh fruit slices, ice, club soda, and these syrups. Below is our favourite combination but you can experiment and try adding juices as well such as pineapple, cranberry, or mango. For adults, coconut rum adds a nice touch. 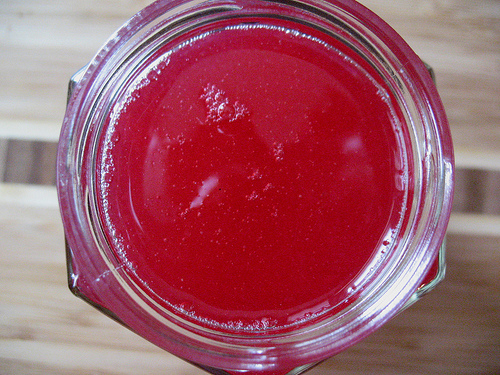 In a medium sized pot over medium heat, bring the rhubarb, sugar, vanilla bean, and water to a boil. Turn the heat to low and simmer until the rhubarb has broken down and the mixture has thickened, about 30-40 minutes. Strain through a fine mesh sieve to catch the solids, remove the vanilla pod, and pour syrup into a jar. Cool to room temperature before sealing and storing in the fridge.

T o make a drink, fill a cup half full of ice. Add 1 cup of club soda. Pour in 3-4 tbsp of rhubarb syrup, and then 1-2 tbsp of lime syrup. Stir. Garnish with a slice of lime, orange slices, or sliced strawberries

Makes about 2 cups of syrup

From cultivating cocoa in Ghana 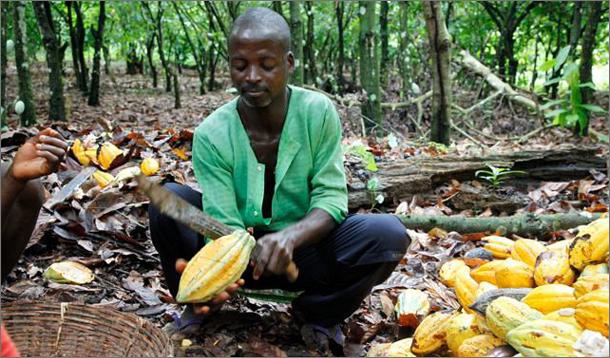 For most of us in North America, chocolate is taken for granted. We can pick up a candy bar or bag of chocolate chips almost anywhere. In Canada, we love chocolate so much that the average person consumes about 4 kg of chocolate each year.

But do we ever think about where it comes from?

As a food blogger, food is more than sustenance. Food is family sitting around the dinner table, or creating something that brings joy to the people I love. Since I began writing about food, I have learned that behind every ingredient there is a story—the shop keepers who stock it, the farmers who grow it, the companies who passionately believe in their products.

I know where a lot of my food comes from and I know how my buying choices can impact those around the globe, especially when it comes to one of my favorite foods of all time—chocolate. So what’s the story there? Where does that Caramilk bar—my favourite chocolate bar—actually come from?

The story of cocoa and Cadbury goes back many decades to family run farms.

Cadbury’s connection with Ghana began as long ago as in 1907, when William Leslie, a cocoa expert from Trinidad, was sent to explore new sources of cocoa. Ghana had some good prospects so he returned again in 1908 with some important recommendations—that the farmers be taught how to cultivate cocoa and that they receive fair payment.

The first shipment of cocoa to Bournville, bought by Leslie, was made in the Elder Dempster steamer "Zaria" which left Ghana in December 1908 and comprised 137 bags, or about 8 tons.

William Cadbury visited Ghana for the first time in January 1909 and he approved the purchase of a small estate (14 acres) at Mangoase, about 40 miles from Accra, to be used as a "model " plantation and buying centre.

The first definite cocoa buying programme was laid down by Cadbury in 1909 and 690 tons of cocoa were bought in the 1909/1910 buying season.

What I’ve learned over the last few years about my favourite chocolate bar is that Cadbury’s partnership with Ghana goes beyond the cocoa crop. With the introduction of The Cadbury Bicycle Factory program, Cadbury is tangibly improving the lives of the farming communities in the country. In the past five years, 18,000 bicycles have been delivered to cocoa-growing communities. 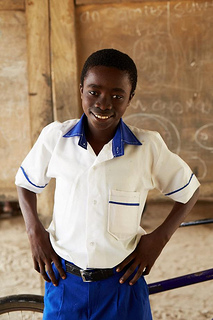 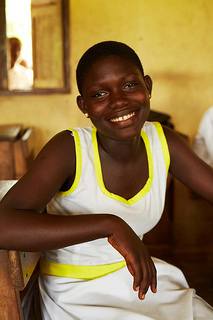 Wisdom and Hannah have both received bikes from The Cadbury Bicycle Factory. Hanna dreams of becoming a nurse, while Wisdom loves football and excels at Math and Science.

A bicycle can make a life-changing difference to a student in Africa. The result is freedom and transportation which can cut travel time to school up to four hours a day (600 hours a year!). The result is far better access to education. For girls, this means empowerment, and a far richer life not just for themselves, but their children as well. A bicycle can pull a family out of extreme poverty—and you can help, just by visiting www.facebook.com/BicycleFactory every day, where you can learn more about the students benefitting from this initiative and participate yourself. Simply click “start  building now” then choose your favourite virtual chocolate bar, to turn it into a bicycle part. Each day, you can add 5 parts to a bicycle.

Only five parts, you say? You bet. Go online and visit every day. Put together a team and challenge each other to build the most bikes. Cadbury's goal is 5,000 bikes, and so far there's less than 52 days left to go. That's a lot of bikes to build! For us, it's just a few computer clicks but for the kids who receive the bikes, it's an avenue to reach their dreams.

Fourteen-year-old Lawrencia wants to be a pilot, and the video below shows the impact that a bike has had on her reaching her dream. I dare you to watch and not be moved. Personally, I don't think I'll ever look at cocoa in quite the same way again. Instead, I'll probably think of where it came from, the people who got it from the fields to my kitchen, and all those gloriously happy faces of kids just like my own, whose lives were changed just because of a bike.

Skip the burger and have a ball 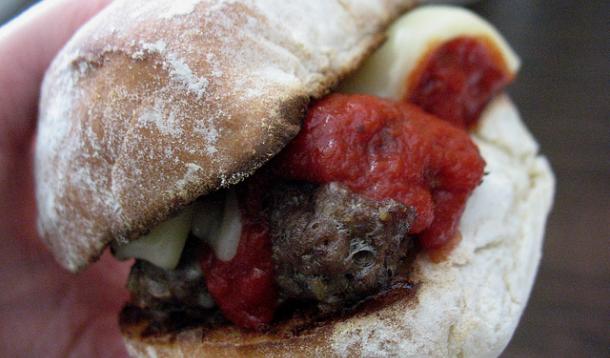 Sometimes you want something a little different than a burger, just for a change. These sandwiches are delicious—oozing with cheese and tomato sauce, with a meaty interior and soft bun on the outside. I love to use Cobs Bread bap buns because they are so soft and pliable, but any soft Italian style bun will do. The best thing about these is that the meatballs are baked in the oven and can be made ahead, baked and then frozen as insurance against a busy week. If you are feeling fearless try some passata with basil in place of the pasta sauce (strained tomatoes in glass jars) or you can pick up any ready made pasta sauce that your family enjoys. For the kids, try making mini ones with tiny sized buns, like a meatball slider!

In a large bowl, stir together the garlic, onion, pepper, salt, Italian seasoning, bread crumbs, and Parmesan cheese. Add the ground beef and mix well with your hands. Line a rimmed baking sheet with foil and very lightly grease it with oil. I like to use a pastry brush, but you can also drizzle a little over & then rub it with paper towel.

Shape the balls into smallish 3/4 to 1/2 inch sized balls and place on the baking sheet. You should get about 26 of them. Bake the meatballs for about 15-20 minutes until cooked through. To check, you can take one off the sheet and cut it in half to make sure there is no pink meat in the middle.

Split the buns in half and place them on a baking sheet. Turn the broiler on in the oven. Gently toast the bun until golden. Meanwhile, put the pasta sauce in a small pot and heat on low until it's bubbling and hot.

Once the buns are lightly toasted, take them out and place four meatballs per sandwich on a bun. Drizzle with about 2 tbsp of the warm pasta sauce. Then place mozzarella cheese on each. Place the sandwiches back until the broiler briefly to melt the cheese, watching carefully so that the buns don't burn.

When the cheese is soft and buns toasted, serve the sandwiches with extra sauce on the side if anyone wants some.