City vs Cornfield: The Teen Years

Is it better to be a teenager in the city or the country?

City vs Cornfield: The Teen Years

Growing up in the cornfield awarded my husband a very different teenagehood than I experienced in Toronto’s closest suburb. We have compared notes many times, and now that I am out here in the sticks, it’s interesting to see that (most of) what he said was totally accurate and not just fable. If we’re still here when my own kids are teenagers, they sure are in for a different ride than the one I was on. For better or for worse. To prepare, a short summary of my life in the city vs. my husband’s life in the country when we were teens.

Highschool
City: Had music wing, art wing, photography lab, pool, auto mechanics garage
Cornfield: Had on-site daycare
Summer Job
City: cashier, grocery store
Cornfield: farmhand, cornfield (This is what all the kids still do. They work hard. It’s insane.)
Leisure Time
City: lounging in backyard or mall
Cornfield: poolside or lakeside
Love
City: Dreadlocked windsurfer, previously unknown
Cornfield: Whomever the least number of your friends had already slept with
Parties
City: Sneaking into clubs where they don’t card; parties in basements
Cornfield: parties in cornfields — follow the empty two-fours placed along the country roads to know you’re headed in the right direction
Trouble
City: getting kicked out of the clubs that didn’t bother to card you on the way in. Injustice!
Cornfield: getting expelled from local campgrounds and Provincial parks for turning the picnic tables into firewood; driving into the lake.
Fashion
City: horrible
Cornfield: even worse
Adventure
City: Dead tour across the east coast, dressed like we wished we lived on the Prairie.
Cornfield: Primus concert in Detroit, dressed like they wished they lived in the city.
Where did you grow up? What were the most memorable experiences of your teenage years?
Category:
Family - Teens
Tags:
City
cornfield
teenagers
summer
being a teenager in the city
being a teenager in the country
Karen Green
Jun
19
2013

Don't like the name somebody chose for their baby? Too bad. 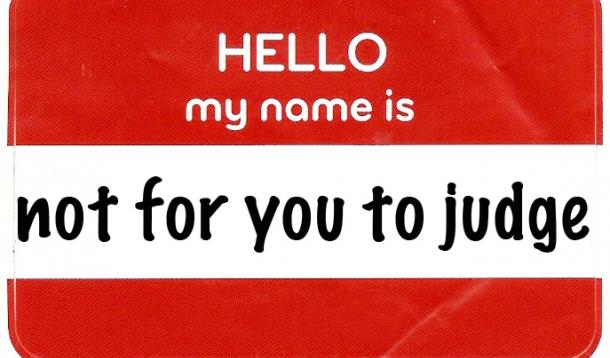 When I was pregnant with my first child (gender unknown), we told my mother that if it was a girl, we were going to name her India. To my husband and me, India was a beautiful, lyrical name steeped in both ancient roots and possibility, and choosing the name for our firstborn child was something we did with the utmost consideration and care. But to my mother, it was a travesty.

India? She practically sneered, Why India? Who comes up with a name like India? We do, we told her, and instantly wished we hadn’t said a word.

Turns out, the baby was born, a girl, and she just was not India. I was a little heartbroken that the name we adored simply did not fit this tiny beautiful creature, but the name she must have instantly came to me. It was one we had bandied around and dismissed months earlier.

She’s Mischa, I told my husband. He agreed. Even my mother was happy with our choice.

It’s so easy to judge parents, but to me, the lowest you can go is to make fun of a child’s name. Celebrities provide the easiest fodder, what with their creatively-nomered progeny (Pilot Inspektor comes to mind), but it certainly doesn’t end there. I have seen friends, relatives, and coworkers wrinkle their noses at a new parent’s name choice. I have even seen a well-known and well-respected member of the online parenting community making fun of a brood of siblings' nature-inspired monikers.

It’s not easy naming a child, and I don’t think there is any parent that doesn’t take particular care and deliberation in deciding on a name. And once a decision is made, that name is instantly connected to the child itself, and to all the emotions that connect you to that baby when it is born.

If we forget about the fact that what somebody else names their child is truly not any of your concern, we could still argue that every child is unique; why shouldn’t their name be, as well? For kids, popular or conventional is not always better. Let’s ask the 50 gazillion Jennifers born in the 1970s if they thought it was so awesome to be known as Jen S.5 throughout their school years.

I’ve heard adults justify their smug judgment with comments like, That’s a lot to saddle a kid with, or He’s going to hate his parents for giving him that name. Maybe that’s true, but I hope that little Oake and her brother Thalon will grow up in a more open-minded environment where acceptance of something as basic as their own name will not be a consideration to fight for.

There’s a postscript to the story of naming my own child — two years later, we were expecting another baby, and we knew it was going to be a girl. Deciding that we could not be bothered to explain our choices this time around, we opted not to tell anybody our short-list of names. Oh god, you’re not going to use India this time, are you? My mother practically started crying. Oh mom, I told her, smiling sweetly, You’re going to wish it was India. 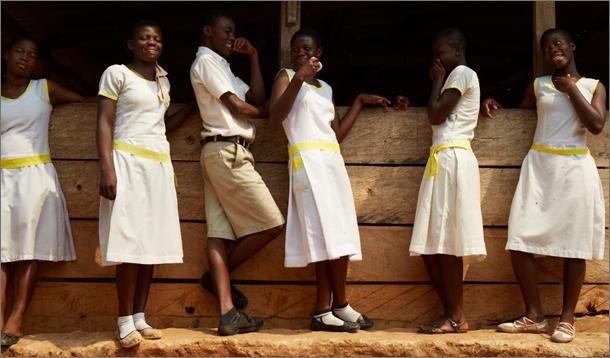 For many of us, a bicycle is a tool for fitness, a fashion accessory, a piece of leisure equipment or a seasonal mode of transportation. Perhaps we load a basket up front with produce from the farmers’ market, or a trailer hitched behind with a couple of kids.

A bicycle, for most of us, is not a necessity and won’t make too much of a difference in our day-to-day lives. We have other options for fitness, fashion and transportation. We don’t think about it too much.

That is what a bicycle can do for girls and women in rural Ghana, Africa.

In the cocoa-growing region of rural Ghana, isolation, custom, and difficult access to higher education has traditionally meant that girls miss out on the opportunity to receive an education or become leaders in their communities. But Cadbury is working hard to change this reality, through its grassroots organizations dedicated to bettering the outcomes for the children of rural Ghana. Through Cocoa Life and the Bicycle Factory program, Cadbury delivers bicycles to thousands of schoolchildren in the region each year, allowing them to get to school on time, with energy for learning, playing and working towards improving their community and their future choices. 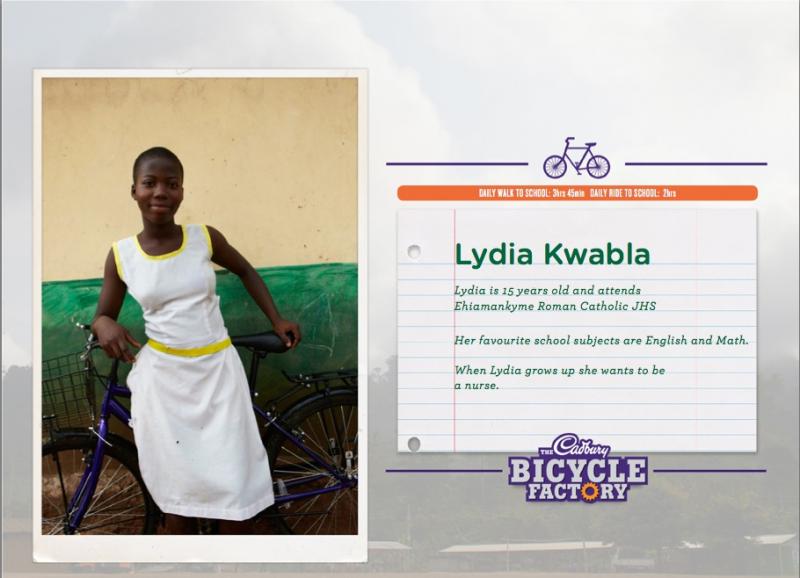 On a recent sunny morning, I had the distinct pleasure of speaking by phone with Yaa Peprah Amekudzi, who has been a Country Lead with with Cocoa Life Ghana since 2002. She explains that with the bicycles, “Children get to school on time, and not tired. Research has shown that children who get to school tired are not able to actively participate in learning, or even playing.”

Yaa believes that to put a bicycle in the hands of these children is to drastically alter their lives. Girls in the Upper-Primary, or 11-16 year old age group are at the greatest risk of leaving school. These girls, who often have to walk more than three kilometres each way to school, also have the greatest amount of domestic responsibilities, many of which must be carried out in the hours before school even begins. Cleaning the family compound, cooking and even washing clothes are often a young girl’s responsibility each morning. Her bicycle from Cadbury can also be used to gather water and make doing these chores easier, faster and more efficient, leaving her time, motivation and energy for school and learning.

Yaa explained to me that, “When a child gets to school tired, and they are not able to actively participate, they are branded as not being intelligent. And no child wants to be seen as the dunce in the class. So the children leave the house in their uniform, but they don’t get to school.” They are too tired and they feel unappreciated. But with the bikes, Yaa continues, “(the children) get to school and they realize that after all, they are smart, so they begin to take an interest in learning. We realize that academic performance really improves when children have access to the bikes.”

And a good foundation for education means that girls are now able to continue on to senior level schools and even university, becoming role models for younger family members and the community. They illustrate the possibilities and choices that an education can bring, from becoming a business owner or other professional, to becoming a community leader or travelling if they desire.

Yaa can see the changes that the bicycle program and greater education bring to all of the women in the community. I asked her what aspect of her job gave her the greatest satisfaction, and she said that watching as a child arrives at school on a bicycle, ready to learn, gives her joy and the motivation to keep working. But one of her greatest joys is to see the direct impact that the program has had on the role of women. Thanks to greater education Yaa says, “Mothers and women in the community are such a big part of the decision-making now.”

She went on to explain, “If there are any decisions to be made with community development – maybe roads, maybe water, maybe sanitation, women must be a part of the decision-making. This cannot be all left in the hands of the men … so the women and the men come together and this builds the confidence of the women.”

“The more they get involved in their own issues (of health, of development, of nutrition, of household security), and the issues affecting the community … it is quite empowering.”

Yaa has seen the cycle come all the way around – she has seen the girls get to school on the bicycles, and get an education. And she has seen the educated girls grow up and come back to the community to use their education to help improve the conditions there.

It is not just about building schools, Yaa told me. She says that you can build schools but, “it is not the school building that is empowering – you’ve got to have the children attend. If the children don’t attend, you haven’t empowered them.” 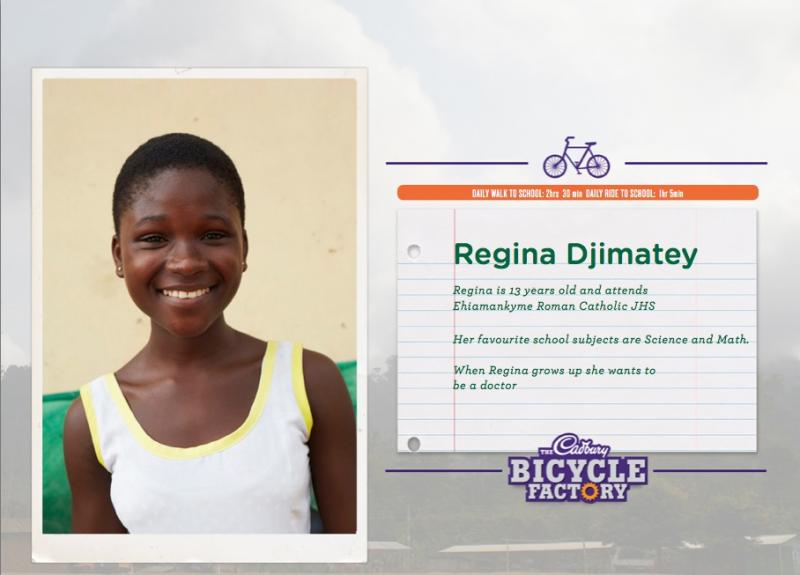 This year, Cadbury plans on sending 5,000 additional bikes to Ghana, but they need your help at the Bicycle Factory.