Turning the Hurt into Happy

How a new Band-Aid Brand app helps to distract 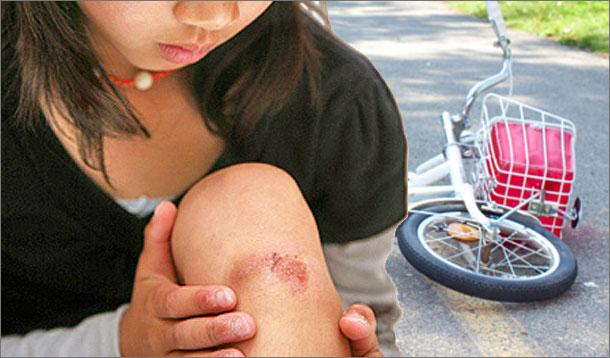 I knew before it happened that the bike was about to skid out from under her. The rock was too big to ride over, the sidewalk too narrow to go around it. I called out in warning and concern, but it was too late.

By time I reached my seven-year-old daughter Mischa, she had crawled out from under the bike and was wiping the gravel from her hands and her knees. I pulled her close to me and she burst into tears.

“You hit the dirt!” I exclaimed, surveying the damage to her legs, arms, and chin. “That was quite a trick—I didn’t know you wanted to be a stunt rider!” My daughter laughed as I wiped away her tears, and we headed for home and a little TLC.

Not surprisingly, as soon as we got in the door and Mischa found a new audience in her sister and father, the tears started again in earnest. “Oh no! We’d better amputate!” Her father’s joke helped distract once more, and we began to clean her up.

The business of being a kid means falls off bikes, scraped knees, and scratched chins.

But the business of being a parent means making the tears disappear and the boo-boos go away.

My first-aid kit includes the essentials like bandages with their favourite characters on them, but it also has to include tricks for distracting from the hurt, comforting and making them feel safe and secure.

A mother’s kiss can work wonders, but when my five-year-old, Cassidy, got her finger caught in the zipper of her school bag, even my magic touch wasn’t enough. (And seriously, how do they manage to do these things in the first place?) A sticker for bravery, a special place next to me on the couch, and a favourite book that we read together finally quelled the tears, but quite frankly, the dramatics were draining on both of us. I needed a new trick to have up my sleeve.

Happily, Band-Aid Brand's award-winning augmented reality Magic Vision app featuring Disney’s The Muppets is now available in Canada from the iTunes App Store, as well as the Google Play Store! When you scan the Band-Aid Bandage with your favourite character on it, Kermit, Miss Piggy and Gonzo all come to life on your iOS or Android device! Kermit sings a special rendition of Rainbow Connection, Gonzo shows off a thrilling new stunt, and Miss Piggy struts her stuff.

The distractor-factor is instantaneous with the Magic Vision app, and helps the tears dry up in no time. And let’s face it—we all know a boo-boo is no fun, but if the kids are going to put on a show, they may as well have the help of their friends, The Muppets.

As my kids and their worlds get bigger, there will be more falls off of bikes, more scrapes, and more bruises. There will be more boo-boos to kiss and owies to fix, and it will be my job to hold their hand without holding them back. Like it or not, letting them grow means letting them go, and though there will be bumps along the way, when you have the things you need to turn the tears into laughter, it helps the hurt go away for everybody.

Find out how you can win a prize filled with everything you need to act and distract your child when she has a scrape or cut.

This is proudly sponsored by our friends at BAND-AID® Brand Canada.
www.facebook.com/BandAidBrandCanada

Karen Green: Out Of My Element My Pioneering Spirit