Give me Kodette over Kardashian any day of the week 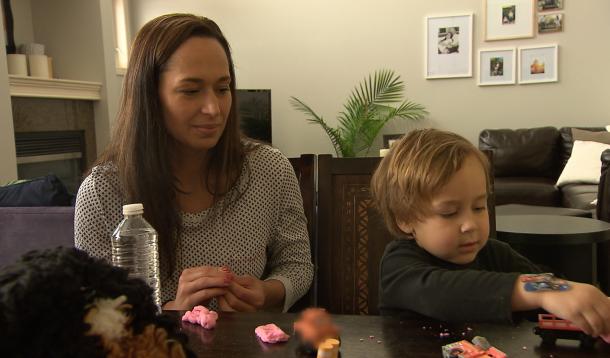 Kodette LaBarbara is not your average hockey wife. Though she happens to be married to NHL superstar Jason LaBarbara, she is a mom first and foremost, and is already sacrificing greatly for the sake of her children.

After their son Ryder was diagnosed with autism at three years-old, the couple made the difficult decision to part ways for the hockey season. While Jason plays for the Anaheim Ducks in California, Kodette flies solo in Calgary. Like many kids with autism, Ryder struggles with change and transitions.

With the constant moving around and lengthy wait lists in every city, it was proving impossible to get Ryder the support he needed. To LaBarbara, the writing was on the wall.

"We finally got approved for funding [in Edmonton] and found therapists and Jason got traded," said LaBarbara in an interview with YMC. "... As I was sitting there filling out MORE paper work, just to be on wait lists, yet again, I was in tears at all the time we were wasting getting Ryder into therapy. So we decided we would stay for the remainder of that hockey season and the following one. We needed consistency and stability for Ryder. We knew he deserved that chance."

Playing the part of two parents takes a strain on Kodette, who stars in W Network's new series, HOCKEY WIVES. Fortunately she can lean on other moms who understand the unique challenges that come with being married to a professional athlete.

So far, Kodette's story provides the most sobering dose of realism in the series. In the second episode (below), she openly laments how the long-distance relationship has affected her marriage. She figures by the time the hockey season is over, it will be a year since she and Jason enjoyed had a date night. Ouch.

Like many parents, autism changed Kodette's world. She soon became her son's advocate, taking courses and getting involved in the Autism Aspergers Friendship Society of Calgary (AAFS) and other organizations. In 2013, her charitable work earned her Phoenix's Linking Sports Community Leadership Award.

If there is one thing she hopes viewers take away from the series, it's approaching autism with understanding—not fear.

"People with autism do things for a reason, possibly from a sensory overload (lights, noise...etc)," said LaBarbara. "So if my son is spinning or chewing on his lip, please do not judge him. He can't help how his body receives stimuli."

I applaud her for taking her private life public for the sake of awareness. Give me Kodette over a Kardashian any day of the week!