Why do they feel the need? 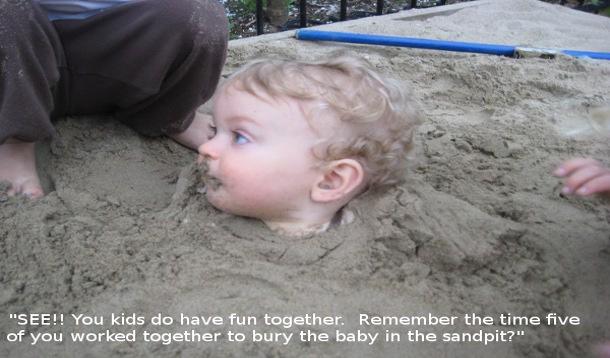 My long-time friend Joanne has a TV show on our local cable station titled “In Your Corner.” She meets with local youth, giving them a voice on various topics.

When she approached me about doing a segment on sibling dynamics, I jumped at it, thinking it would be fun for my kids to share their experiences being part of a big family. Joanne sent along a form for each to fill out so she could prep for the show.

I distributed the forms to my darlings and was horrified by what they returned to me. All they wrote were complaints about siblings—“They’re annoying,” “They get into my stuff,” “I have to share,” etc. I don’t want to sugar coat their relationships or portray them in a certain way, but couldn’t they mention ONE nice thing? I racked my brain trying to think why they would have answered like this and my only theory is that perhaps siblings think it is their job to publicly declare one another pests. God forbid they gush about how awesome it is to have each other.

What didn’t they mention? No one noted the time I tried to organize “parent/kid date night” so kids could have one-on-one time, and it was a bust because nobody wanted to do an activity without a sibling. Then there is that one kid who won’t go to a friend’s birthday party without a sister there because it feels too “weird” to be somewhere without a sibling. Or that daughter who feels “lonesome” when not in the same skating group or dance class as her brother. Then there are the several kids who won’t go to bed until all the siblings they share a room with are home because, again, it feels too “weird.” Oh yeah, and how about the one who is sad because “only” three of her siblings are at her school and not all five of them.  There’s fun stuff too—the secrets they share, the pranks they pull, the made-up games and traditions, the laughs in the pool, the fun they have skiing together, playing baseball and hockey, rollerblading to the park—the list goes on and on.

But did any of this get written down on their forms for the show? Nope.

I warned my friend Joanne about her biased interviewees, but she’s not one bit phased by it all. To be safe, I don’t think I’ll stick around to see the sibling bash take place on taping day. My absence will lower the chances of me standing up and yelling “CUT! It’s all lies I tell you, LIES,” which would kind of defeat the purpose of giving youth a voice.

If we can get through taping “In Your Corner” without me putting someone in the corner, I think we’ll consider it a success.