How To Be A Sports Fan Without Being An Ass 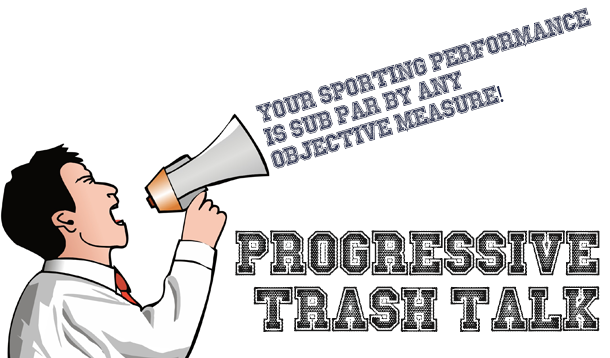 I'm a fan. My wife's a fan. My kid? Yup. She's a fan too. We go to games, we watch on TV — heck we even listen to sports radio (well, I do. And the kid does by proxy when she's with me. Amy's not such a big fan). I grew up playing, watching, and loving sports and my kid is well on her way to doing the same.

But for all of the progress we've seen in the sports world — jock radio hosts speaking openly about autism and massive campaigns against casual homophobia to name just two examples — some toxicity lingers, particularly in the all-important realm of trash talk and chirping. In particular, causal sexism and homophobia feature prominently.

And while I could take the passive route, wagging my finger and tsk-tsk-tsking, I prefer proactive solutions. After all, I don't think people who use terms like "faggot" or "pussy" are necessarily intending to be offensive. Ignorance and "it's just something we say" are far more likely to blame than deep-seeded sexism or homophobia.

So instead of scolding, I'm going to offer alternatives. Want to demean an opposing player? Don't use gender or sexuality as a pejorative, use this handy guide instead!

Probably unnecessary warning: There's some salty language ahead. But I assure you, the cusses are for illustrative or ironic purposes only.

Common chirp: "What a pussy!"
What it's usually supposed to mean: "That person exhibits cowardice and seems to lack fortitude"
Why it's offensive: Pussy is a common slang term for a woman's vagina. Thus using the term to suggest weakness, cowardice or a lack of fortitude implies that such traits are somehow inherently female. Which is bullshit.
Simple alternative: "What a chicken!" (I'm not sure why chickens get the short shrift in common parlance, actually)
Creative alternative: "What a chinchilla!" (Chinchillas are notoriously timid. Also it's fun to say chinchilla).

Common chirp: "Fuck you, faggot!"
What it's usually supposed to mean: "Fuck you, random word I consider to be insulting"
Why it's offensive: Faggot is a pejorative term for homosexuals. You probably already knew that.
Simple alternative: "Fuck you!" (Beauty can be found in brevity, folks)
Creative alternative: "Fuck you, milk that goes sour before its stated date of expiration!" (Prematurely sour milk is universally disdained and with good reason. Ain't nobody gonna defend that)

Common chirp: "Sidney Crosby? More like CINDY Crosby, amiright?" (or any other substitution of a traditionally-female name for a man)
What it's usually supposed to mean: "HA HA GIRLS ARE BAD AT SPORTS"
Why it's offensive: Girls are good at sports. Well, the ones that are good at sports are. They're like men that way.
Simple alternative: <Silence>
Creative alternative: "I'm a jackass neanderthal!"

Common chirp: "Cocksucker!"
What it's usually supposed to mean: "That man enjoys the company of other men and is thus bad at sports."
Why it's offensive: One's preferred method of pleasuring one's lover has no bearing on their athletic prowess. And using a homosexual act as a pejorative is insulting to homosexuals.
Simple alternative:  I dunno, maybe not calling someone a cocksucker?
Creative alternative: "Flan!" (Flan is an open pastry or sponge cake containing a sweet or savoury filling. So it's probably bad at sports)

What other sexist and homophobic trash talk needs to be wiped out of our locker rooms? Let me know in the comments!

BONUS DOWNLOADABLE: Print out the cheat sheet below and slip it into your wallet or backpack and never be without a progressive sporting put down again! 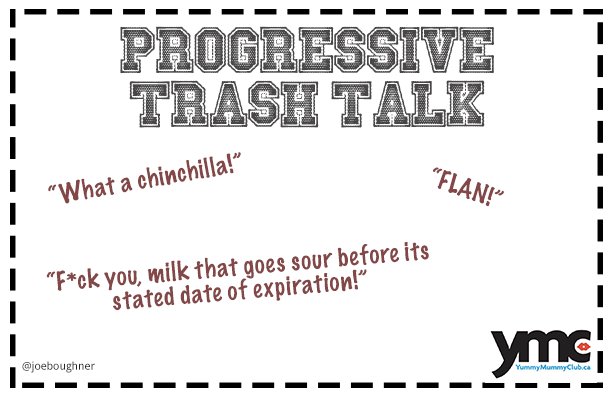 Did you enjoy this look at non-neanderthal sport fandom? You might also enjoy "Two Men Are Kissing On ESPN! What Do I Tell My Kids?" or "Play Like a Girl? Don't Mind If I Do"

Category:
Health - Sports
Tags:
girls and sports
how not to be an asshole
offensive phrases
naked dad
sports
Joe Boughner