This Is What a Feminist Looks Like. Beard and All

Yup, it's another rant about gender 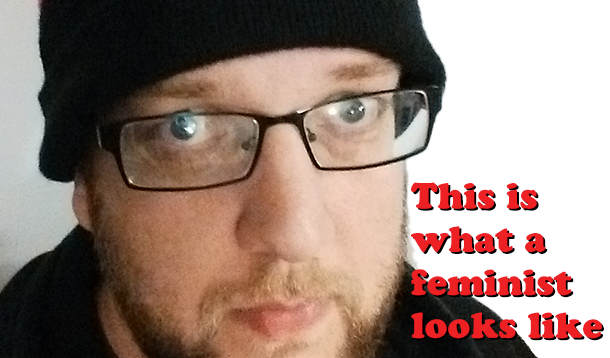 GamerGate. "Leaked" (I prefer the term stolen) celebrity nudes. Not content with good old garden variety everyday sexism, it seems like the internet has been hellbent on making life especially miserable for anyone who happened to be born without a penis lately. It's enough to make me horribly pessimistic about the future my daughter will inherit.

The other night, while I was starting to mentally draft this post, I tweeted my thoughts about once again tackling this issue:

Am I a bad dad blogger if I write about gender issues again? I mean, it's not as funny a topic as "my kid said fart" but… important.
— Joe Boughner (@joeboughner) September 22, 2014

Also: the stupid world makes me think about stupid gender issues a lot and I'm trying to raise a strong woman that won't deal with your shit
— Joe Boughner (@joeboughner) September 22, 2014

But the more I think about it, the more I realize that there's reason for optimism too.

I don't know if it's just that I've become more aware of this sort of thing since having a daughter (probably) or if we're truly on our way to hitting peak misogynist thanks to the proliferation of anonymous asshattery online and the subsequent proliferation of women deciding they're done putting up with this shit calling attention to it.

These days, for every online shitfest that women in technology are forced to endure by neanderthals, there's an eloquent and inspiring call for equality like this free-verse masterpiece by the always awesome Emily Graslie.

And for every person - man or woman - who decides that they don't need feminism, or that feminism has run its course, there's someone like Emma Watson reminding us all that women AND men have a role to play to promote equality and that feminism isn't a dirty word.

So if we really are at a tipping point - if this fight really is going down now - I'm ready to fly the flag and pick a side. I've added my name to #HeForShe's list of men who are taking a stand against gender inequality. At the time of writing I'm one of 45,266 and I look forward to watching that number grow.

This is what a feminist looks like. Beard and all.

If you enjoyed this you might also enjoy "5 Important Things I've Learned While Raising a Girl" and "It's a Miracle I've Never Raped Anyone."

Joe Boughner: The Naked Dad In Praise Of Stories: The Adventures Of Harold And Harriet