Why A Doctor of Optometry Made My Daughter Cry

It's not for the reason you may think... 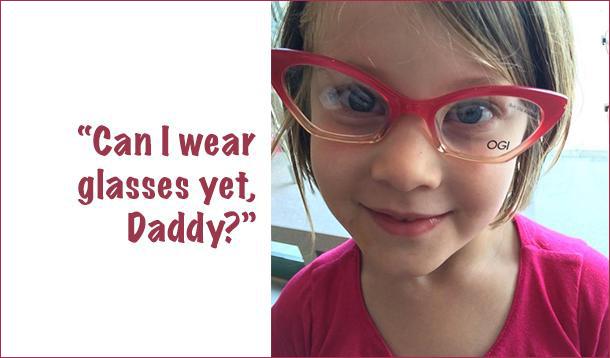 I remember it well.

Tears streaming down my face.

I was standing in the Doctor of Optometry's office convinced the world was coming to an end. My glasses needed to be fixed and I'd have to wear a loaner pair. They were big, brown, and hideous. I couldn't have been more than 9 or 10 but I was convinced my life was over — or at least my career as a fashion icon (the sort of fashionista that rocked Super Mario Brothers sweatshirts, anyway).

My life did go on, though. But fast forward 25 years and, once again, there was a Boughner child, standing in front of a display case full of eyeglasses, tears visible on her cheeks.

"But I really want glasses!"

Yes, my kid — aged four — was in tears. She'd just had her first eye exam and was told her vision was perfectly fine. In hindsight, we should've seen the waterworks coming. I got my first pair of glasses in grade one. My wife got hers shortly after. Both grandmas, a grandpa, her aunts and her uncle all wear glasses. The kid is surrounded by bespectacled, loving family members.

The good news for my kid is that genetics pretty much dictate she's going to need glasses — likely sooner rather than later. So for my wife and I, it was important that we introduced her to the world of eye exams early — even if only to be reassured that her visual skills are developing normally (so far, so good!).

Her first exam with a Doctor of Optometry was when she was four and now that she's starting school, she has yearly exams (yes, even though her vision is perfect) to look forward to. Luckily, she took to eye exams like a fish to water. She may not show the signs of needing glasses yet but odds are she will, soon.

Here are some signs to look for if you think your child may need glasses:

If you've got kids starting school this fall, it's a great time to take them in for an exam. The recommendation is to get annual exams for school-aged children and Doctors of Optometry start giving exams to kids as young as six-to-nine months of age which seems young, but I can tell you from experience that our doctor was great with our kid, using age-appropriate language and keeping things light and engaging.

When the time comes that my daughter does need glasses, I'm confident she will have more trouble settling on a colour and design than she will have adapting to wearing them. If your child has trouble adapting to glasses though, the Doctors of Optometry offers some great resources to help you out.

Thankfully, styles have come a long way from the round, brown monstrosities that I was forced to wear as a kid. Though they'd probably be hipster-cool again by now...

Sigh. I guess I was just ahead of my time.

Did you know your child could have problems seeing things clearly and not even know it? Don’t make the mistake of thinking you’ll know if your child has a vision problem.