What next, boys doing laundry or cooking dinner? 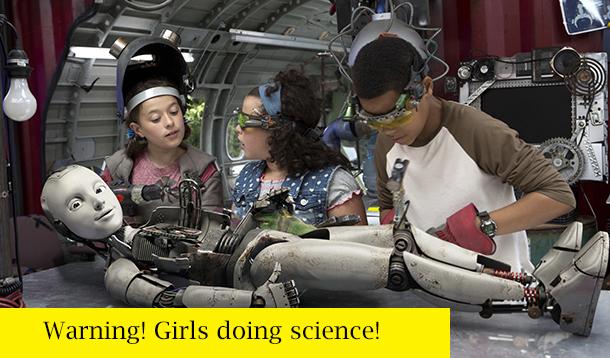 Despite my attempts to warn the parents of today about the dangers of girls doing science, it seems the people at TVO and Toronto's Sinking Ship Entertainment are hell-bent on encouraging this risky behaviour.

How else can you explain the new show Annedroids? In it, an 11-year-old girl named Anne builds robots and androids to help her perform experiments as though women and girls are supposed to suddenly start taking an interest in the fields of science, technology, engineering and math.

Take this line from the show's promotional materials: "There's nothing Anne likes more than getting her hands dirty to make things, breaking things apart to see how they work, and mixing things together to see that happens. Anne takes the stereotype of a typical tween girl and busts it right open."

Shocking AND offensive, if you ask me.

Alright, that's probably enough sarcasm. Honestly, I'm so glad that TVO is making an investment in a show like this. As the father of a four-year-old girl who loves, in her words, "doing science" (her most popular experiment is tying various toys to her helium balloons to see which will float in the air), shows like Annedroids can only help to normalize and encourage such passions.

From what I've seen, my daughter is probably a year or two from really being able to get into the show (it's targeted at kids age 6-9), but if you've got kids in the early years of elementary school, I strongly urge you to check this show out. The three main characters—Anne, Nick, and Shania—do a great job of introducing scientific principles and educational content in a way that doesn't feel forced—something that's key to making content like this stick (something poor Astar never figured out. Oh Astar, you may've been a one-trick pony, but it was a good trick).

And when your kids start bringing home report cards with high marks in science and math, you'll have robots to thank.

A quick note of disclosure: When TVO contacted me about this show, I got really excited and decided I'd write about it. It was only after that that I discovered Sinking Ship was involved. And, as I learned a couple of years ago, one of the founders of Sinking Ship is an old friend of mine from my three-year stint in New Brunswick as a kid. I can assure you that the fact that Matt came to my 11th birthday party had no impact on my decision to write about this show or my enthusiasm for it, but I figured I should lay my cards on the table, just in case.

If you liked this, check out: "5 Important Things I've Learned While Raising A Girl" and "Children's Television: A Field Guide."